5 Best Manga and Anime like Ghost in the Shell

What is your favorite anime of all time? Ghost in the Shell is one of the most famous and influential anime series and movies, which has been positioned to spread and lead Japanese anime all over the world since the first film was released in the 1990s.

About Ghost in the Shell

Ghost in the Shell (攻殻機動隊) is one of the most famous and popular anime franchises worldwide. The cyberpunk series started as a manga series written by Masamune Shirow, published as the first volume in 1991. It was followed by the second volume 1.5: Human Error Processor and the third volume 2: Man-Machine Interface.

From 2013 to 2014, the newly titled movie series Ghost in the Shell: Arise came to the big screen, which contains 4 parts directed by Kazuchika Kise. There are also manga adaptations in Stand Alone Complex and Arise. In 2020, an original net animation titled Ghost in the Shell: SAC_2045 was distributed with 12 episodes on Netflix.

Based on the manga series by Masamune Shirow, the first live-action movie was released in 2017, directed by Rupert Sanders.

Ghost in the Shell is set in a futuristic sci-fi world around 2030 when the science technology including including cyborgs and cyberbrains is highly developed. It centers on a cyborg Major Motoko Kusanagi, works to prevent crimes with other Public Security Section 9 members.

Psycho-Pass is set in Japan in 2112, where citizens are controlled by Sibyl System. The futuristic computer network quantifies their psychological states and personalities. The numerical number is called Psycho-Pass. The thriller and cyberpunk anime focuses on the members of Unit One of the Ministry of Welfare Public Safety Bureau’s Criminal Investigation Department.

For fans of the Ghost in the Shell series, the worldly renowned anime movie Akira is a must-watch content. The Katsuhiro Otomo’s masterpiece is looked on as one of the best Japanese cyberpunk movies of all time. It was originally made as a manga written by him and its anime movie adaption was released in 1988, based on the first 3 volumes that had been published by then.

The setting of Akira is Neo Tokyo in 2019, where Tokyo is destroyed due to the outbreak of WWIII. There are two main characters in Akira: a leader of the Bosozoku group (Japanese biker gang) named Shotaro Kaneda and his childhood friend Tetsuo Shima. The story unfolds first when Tetsuo gains a supernatural power after a motorcycle accident.

Cowboy Bebop (カウボーイビバップ), categorizes as not only cyberpunk but also action and other genres, is similar to Ghost in the Shell. It has been known as one of the most famous anime series especially in foreign countries. The Sunrise’s anime consists of 26 episodes airing in 1998, which was followed by the first and only anime movie titled Cowboy Bebop: The Movie in 2001.

Cowboy Bebop is set in the space in 2071, where the bounty hunters including the protagonist Spike Spiegel and his partner Jet Black. They travel around the space in a spaceship called the Bebop, meeting other imperfect crews and combating against criminals. 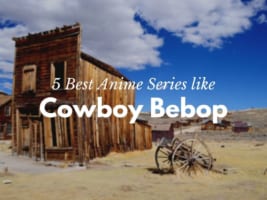 JoJo’s Bizarre Adventure (ジョジョの奇妙な冒険) is a dark-fantasy adventure manga and anime series, which has been loved by adults since the manga series started by Hirohiko Araki in 1986. JoJo’s Bizarre Adventure consists of 8 parts with different titles released until today. The first five parts are adapted into anime adaptions from the first Phantom Blood in 2012-2013 to the fifth Golden Wind in 2018-2019. The sixth part Stone Ocean will be adapted into the fifth season of the anime series on Netflix in December, 2021.

JoJo’s Bizarre Adventure tells the story of the mysterious adventures of the Joestar family. A main character varies by the part, but they all are the Joestar family. There are a variety of unique characters with supernatural abilities and intense battle scenes between them in the whole series. 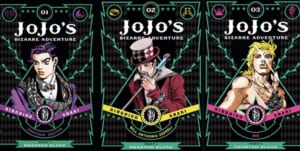 If you look for some unfamiliar manga and anime that are similar to Ghost in the Shell, a crime and thriller series Black Lagoon is highly recommended to check out. Its manga series written by Rei Hiroe has been serialized on Monthly Sunday Gene-X since 2002. The first anime adaptation with 12 episodes and the second half were released in 2006.

Black Lagoon is set in Roanapur, a fictional city in Thailand, in the end of the 20th century. The story begins when an ordinary business person Rokuro Okajima gets involved in crimes of the pirates called the Lagoon Company and comes to join it with another name Rock.