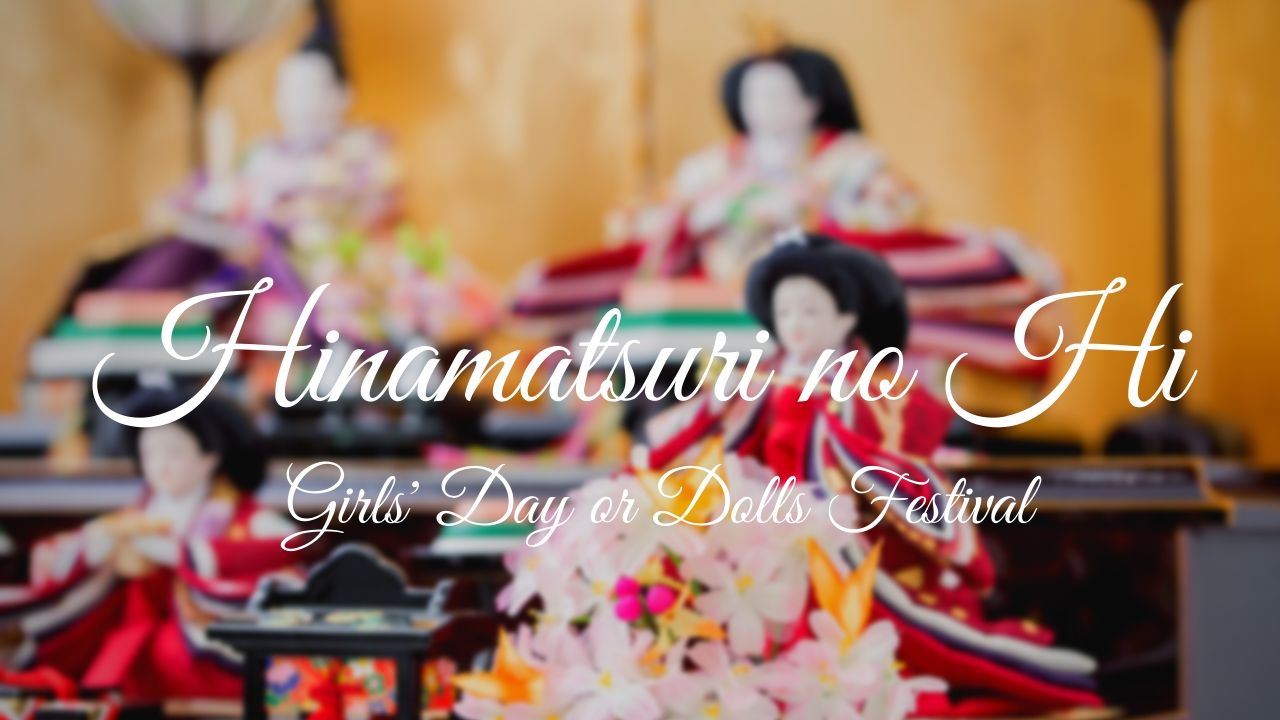 If February is the month of the Setsubun and Valentine, March is the month of the Hinamatsuri. In Japan on March 3, the hinamatsuri (雛祭) is celebrated, also known as “Dolls Festival” or “Girls’ Day”. The day after removing Valentines decorations in supermarkets, they begin to dye pink to prepare one of the most visually attractive festivals in Japan. 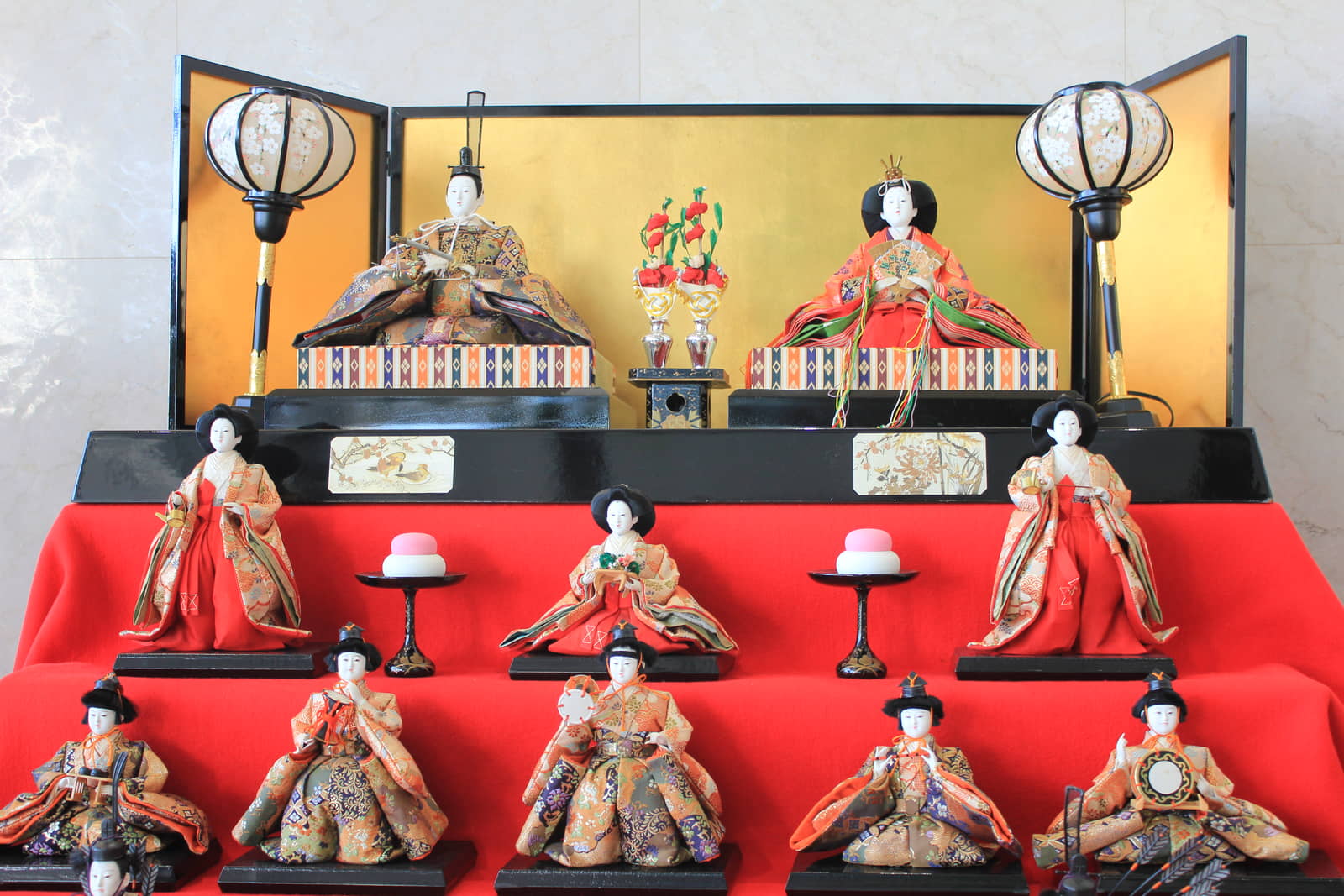 The hinamatsuri serves to wish good health and a happy future to the girls. That is why it’s said to be an important day for Japanese girls, since it is a holiday dedicated only to them. Subsequently the children have their day in May with the Kodomo no Hi or children’s day.

On the other hand, according to the lunar calendar, March is the time when peach trees bloom. That’s why this festival is also known as Momo no sekku (桃の節句) or “Peach Blossom Festival”. That’s why the Hinamatsuri has ended up becoming a tradition that announces the arrival of spring in Japan.

The origin of the Hinamatsuri

The hinamatsuri is the second of the five great celebrations known as gosekku (五節句). Gosekku take place on odd days when the number of the day coincides with that of the month. Exactly on January 1, March 3, May 5, July 7 and September 9. It’s believed that during these days luck reaches its peak, and through different ceremonies evil spirits are driven away and people are protected. These celebrations were adopted in ancient times by the imperial court of Japan influenced by Taoist thinking from China.

The hinamatsuri has its origin during the Heian period (from 794 to 1185) and comes from an ancient tradition. In China it was believed that with the change of season (from winter to spring) it made people more vulnerable to colds and other diseases. If you remember when explaining Setsubun, it also has to do with the belief that in the changes of seasons the demons appear. In the case of China, to avoid getting sick men and women cleaned the impurities by rubbing dolls made of paper or straw and then getting rid of them by performing a ritual and sending them downstream or to the ocean.

In Japan, this ritual was adopted by the aristocratic classes in the eighth century and later it was extended and modified. This tradition, called nagashi-bina in Japanese, was to put bad luck on the back of paper dolls. Then the doll was placed on a small straw boat and allowed to go over the waters of the Takano River. It was also believed that while sliding down the river the dolls were catching and taking away the evil spirits. That’s why it was believed (and still believed) that this ceremony manages to expel evil spirits and protect girls. This part of protecting girls has that Chinese idea that at this time girls were more likely to get sick and that by doing this ritual they would enjoy good health.

Today there’re some places where you can still carry out this ancient tradition of throwing paper dolls downstream, even if they are few. For example, here you have a nagashi-bina in Kyoto.

Over time the wealthy families were mixing this ancient tradition with the game of playing with dolls (since they were the only ones who could afford to have dolls). Finally, at the beginning of the Edo period (1603-1868) the Hinamatsuri festival was born as it’s known today. The simple paper dolls were exchanged for much more elaborate and expensive ones, which they didn’t want to throw away. So the interior of the houses began to be decorated with them. Originally, this festival was celebrated only in Kyoto. This city had been the capital during the Heian period and the nobility and imperial family had resided, which as I said were the only ones who could afford these dolls. But little by little it spread throughout the country, although with somewhat more affordable dolls. 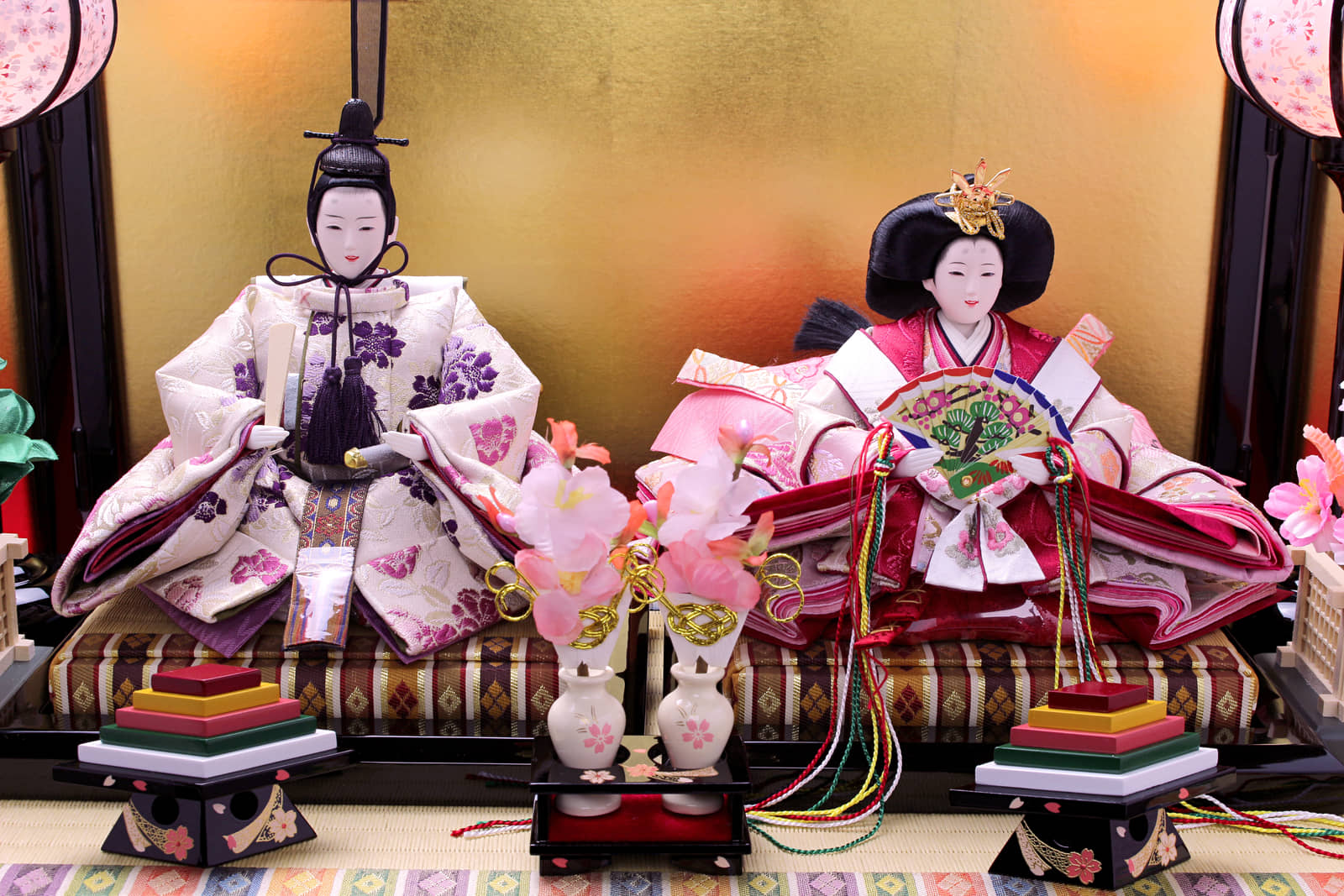 Currently for the hinamatsuri families with young daughters decorate their homes with a set of Hina dolls. These games are usually expensive and have 15 figures representing the imperial court of the Heian period. They are placed on a platform of 5 to 7 floors. All dolls are dressed in traditional kimonos.

The usual thing is that in the first hinamatsuri of a girl, which is called hatsuzekku, it is her grandparents who give her first Hina doll set with the main or most important dolls and then each year they add until the entire game is completed. Often these dolls are also family inheritances that pass from generation to generation and the girl has the complete game from the beginning. This set of dolls and accessories is known as hinakazari (雛飾り) and are placed neatly on a stair (hinadan) covered with a red carpet (himōsen). If the set is complete, there must be seven levels with the following dolls and order: 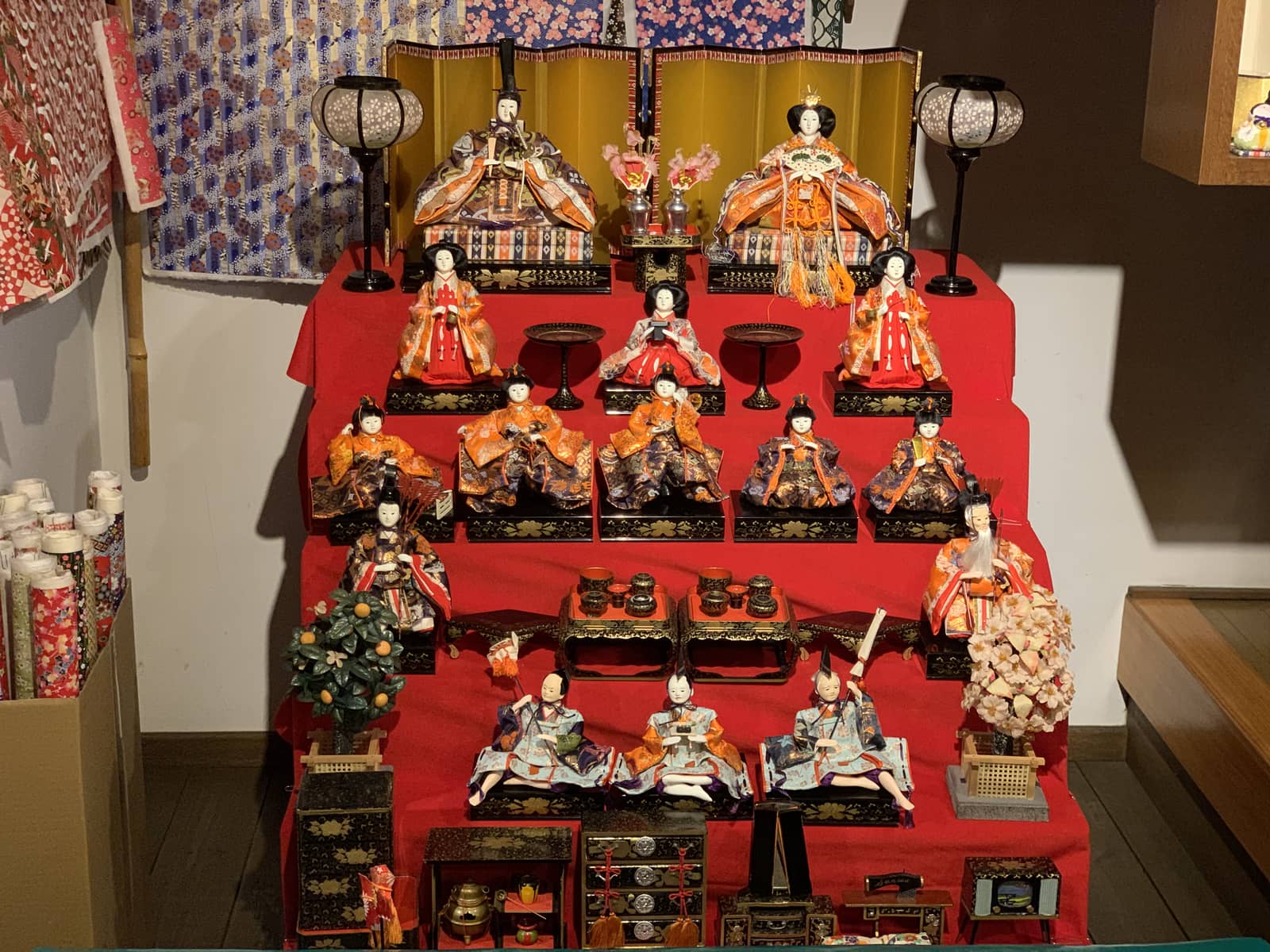 First level – Dairibina (内裏雛): Is the upper level, above all. It’s the most important level, since two dolls representing the Emperor and Empress are placed here. Usually they’re the first dolls that grandparents give to their granddaughters. They’re dressed in the ceremonial kimono. Behind the wrists is usually a golden screen, and lampposts or peach blossoms.

Fourth level – Zuishin (随身): The Zuishin are two ministers, one young and one old, who are the guardians of the emperors so they usually carry weapons (mainly bow and arrows).

Sixth level: Here is the place for the trousseau of the bride (the Empress) and various belongings.

Seventh level: Finally the objects that the emperor needs are placed.

The hinakazari is usually placed a week before March 3 and is removed on the same day 3 at night so that luck does not leave the girls at home. There is the assumption that if he retires late, he won’t find a husband when he grows up.

As usual in celebrations in Japan, there’re also foods and dishes typical of this day. I will show you some of the most typical but there’re also other dishes or foods that have become popular today due to their color or shape (such as strawberry daifuku) 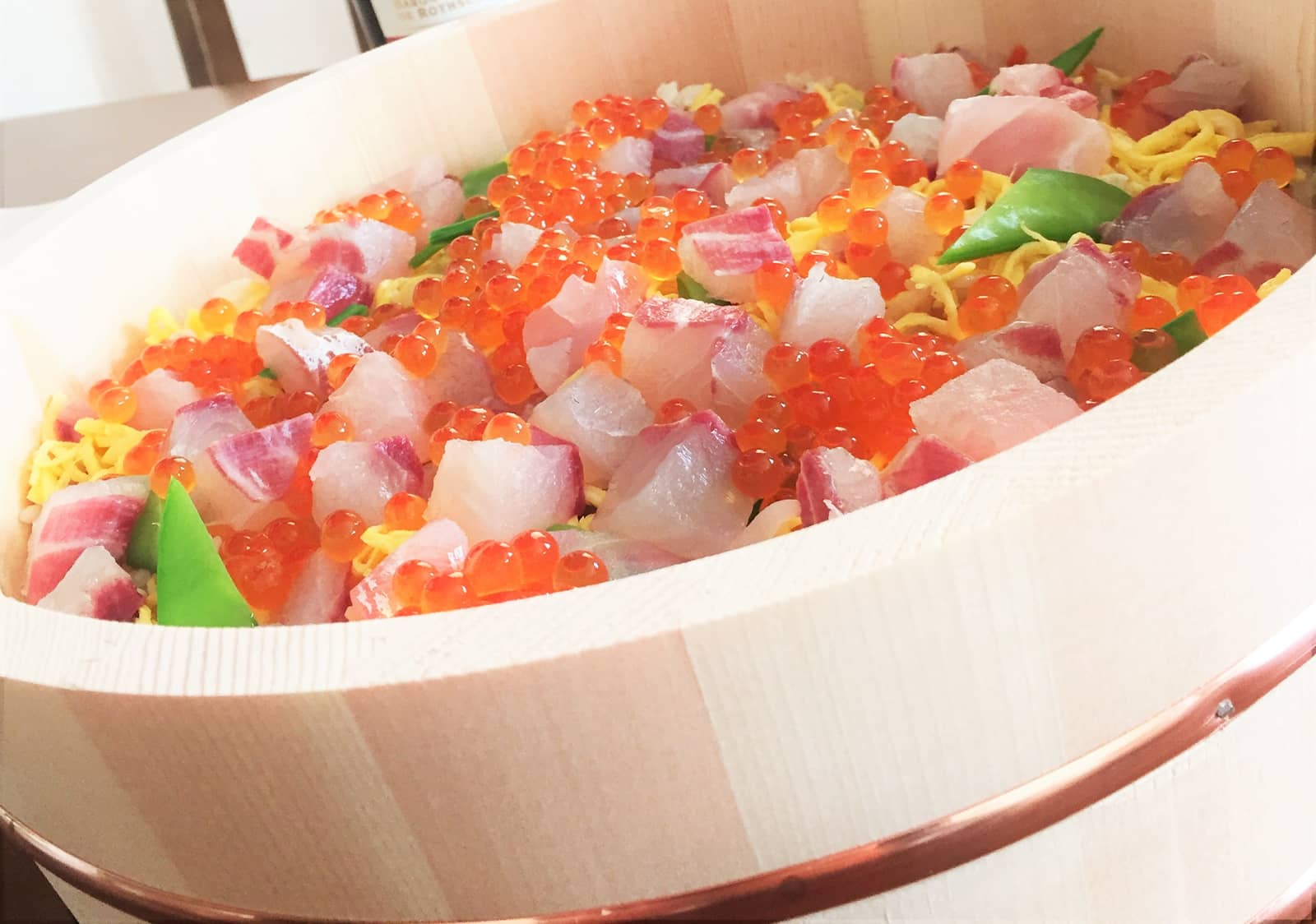 The most popular dish for this day is Chirashi zushi (ちらし寿司), a variant of sushi. Chirashi in Japanese means something like “scattered” by the presentation of the dish. It usually has several ingredients such as prawns, salmon roe, shiitake mushrooms and eggs but in fact you can basically put everything you want in it. However, for the hinamatsuri the chirashi zushi must include prawns, since they symbolize a long life until your waist bends like that of the prawns; lotus root as a good forecast for your future and beans as a meaning of being able to work healthier and harder. On the day of the hinamatsuri they sell it already prepared in all supermarkets, although many people think it’s best to prepare it handmade at home (usually the mother or grandmother prepares it for the little girl).

If chirashi zushi  is the most typical dish, Sakuramochi (桜餅) is the favourite sweet for this day. Basically sakuramochi is a pink mochi (rice dough). This slightly sweetened pink mochi is filled with a paste of sweet red beans (anko) and wrapped in a sakura leaf (young cherry blossom) salted. Taste the best with a Japanese green tea. 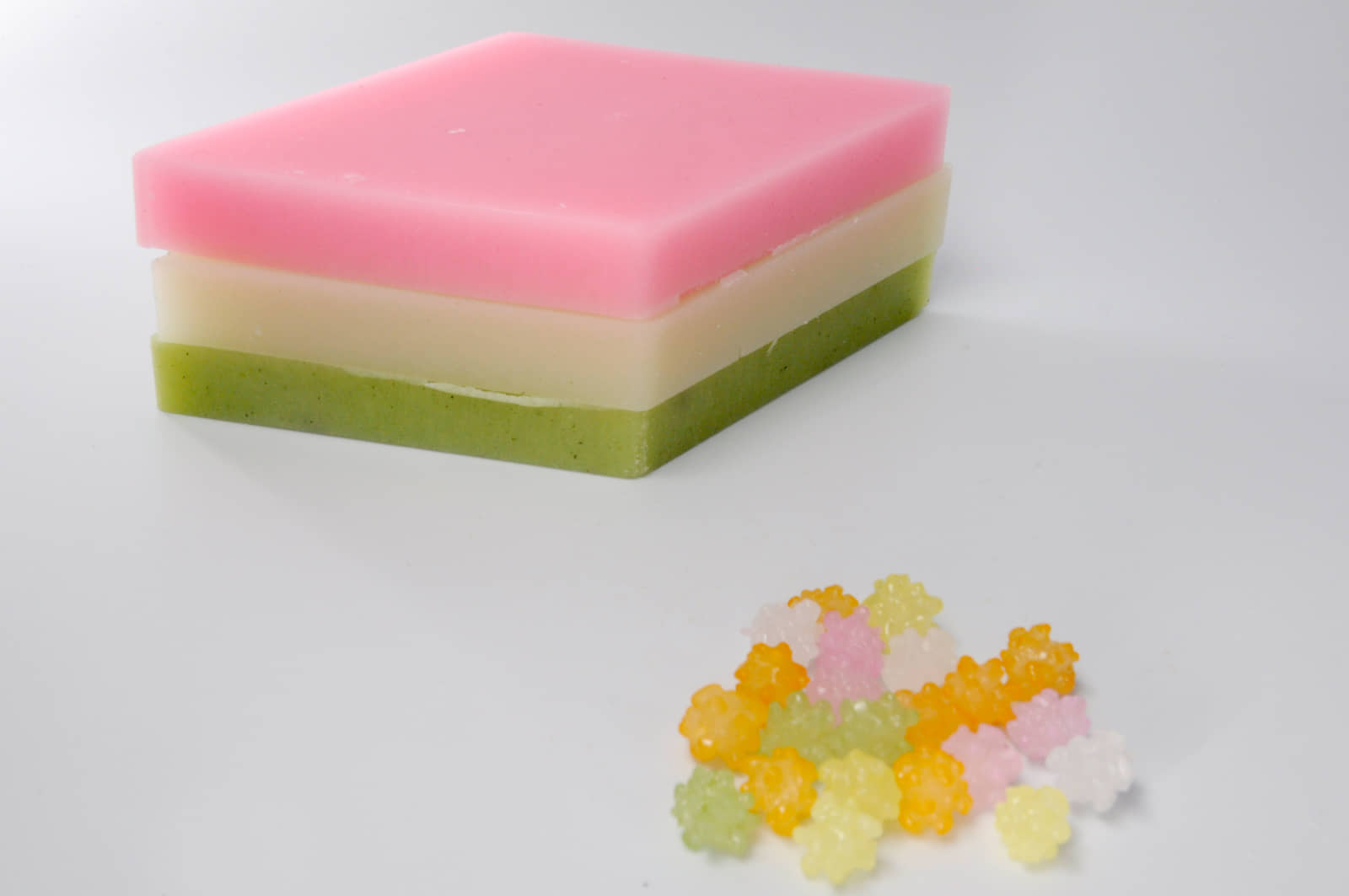 Hishimochi (菱餅) is a rhombus-shaped rice cake. The cake is composed of three floors, each of color: green the base, white the central part and pink the top. If you don’t like mochi (rice cake) in some places you can find a more modern version made with three-color sponge cake and cream on top. 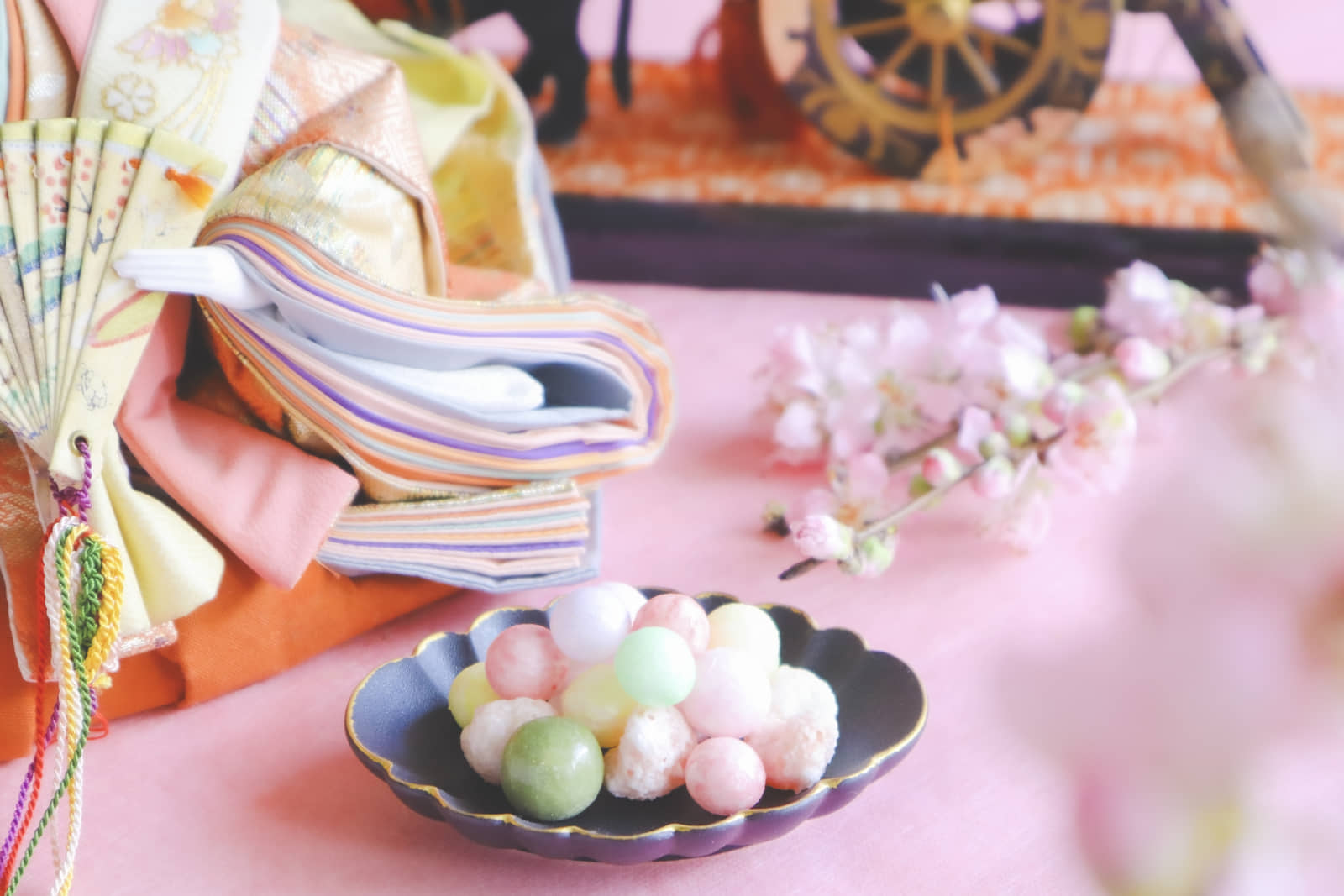 The hinaarare (雛あられ) are a kind of sweet colored rice balls with sugar (above) or soy sauce (down right), depending on the region. It’s said that these balls protect girls from disease and bad luck. Sometimes they are usually presented together with other types of candies also of light colors. These types of candies are very typical in the Kyoto region, where the hinamatsuri began to be celebrated. Basically there’re two types of candies, some with a more round shape and others with a star shape, like the ones you can see in the photo below on the right. 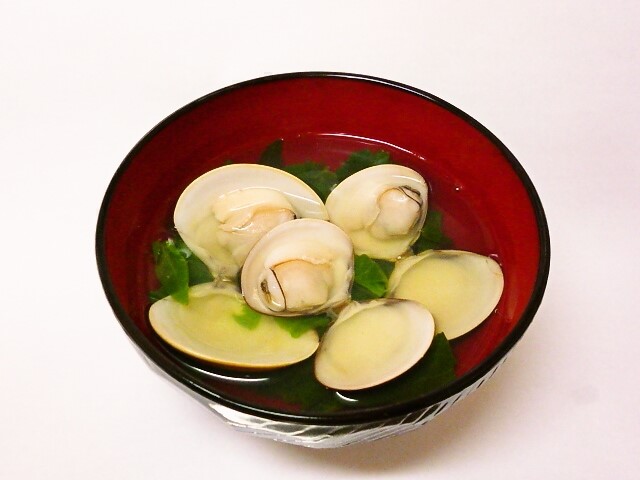 Ushio-jiru (潮汁), or clam chowder, is a clear soup made especially with clams, although sometimes another type of seafood or white fish is also used, and seasoned only with salt and sake. It is the most popular soup to accompany chirashi-zushi. Clam shells symbolize two parts that fit perfectly. This represents the desire for a happy marriage union and for girls to find a partner that fits them. 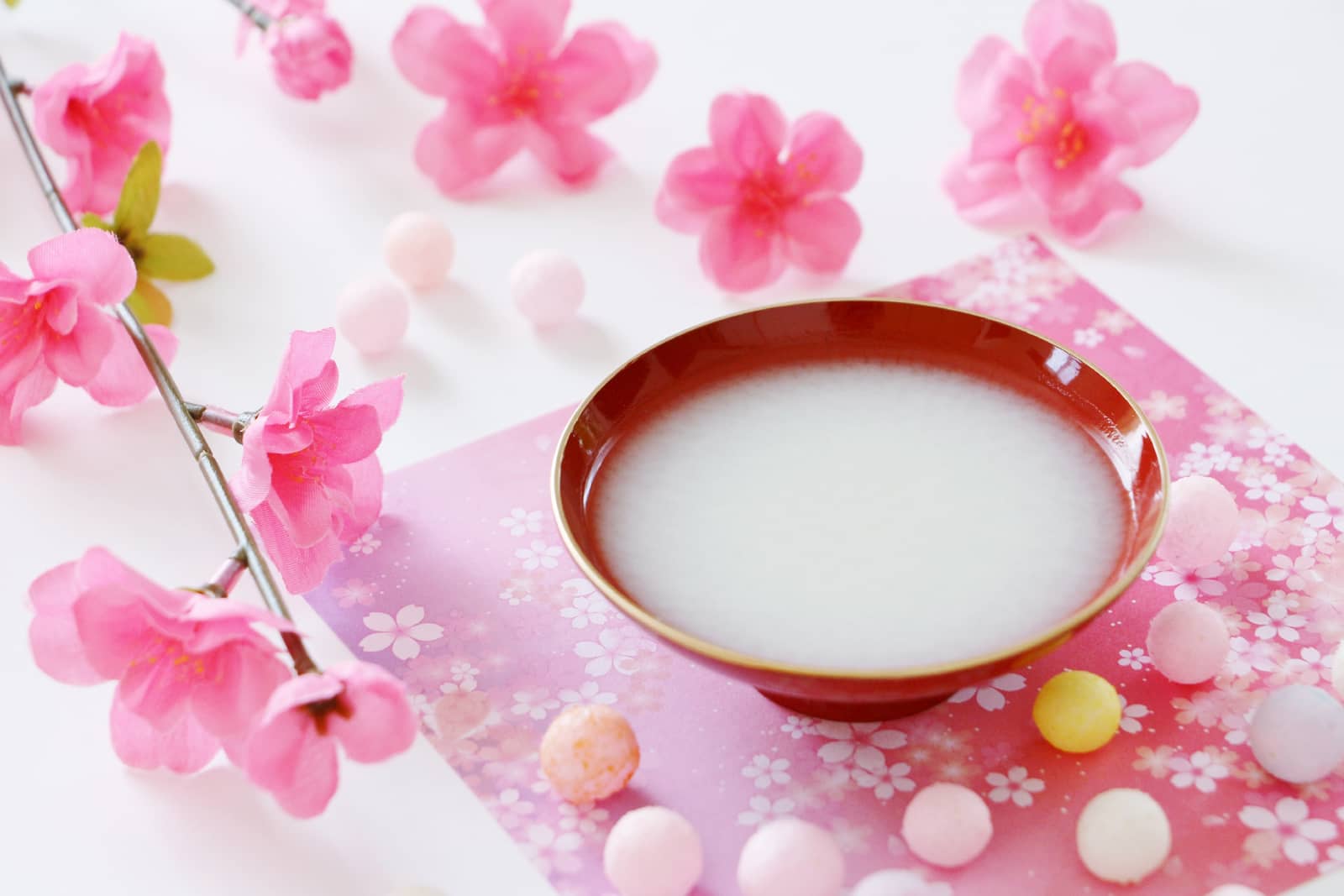 Shiroza (白酒) is a sweet white sake. It’s usually made of peach, and is low grade so that children can drink it. The texture is a bit doughy, and it can be difficult to drink the first time you try it. You can also drink hot. Although shiroza is the best selling option, is also common  find in the supermarkets any type of sweet or peach drink is also common.

As you have seen, most sweets linked to this festival contain three colors: pink, white and green. These colors aren’t chosen at random but have a meaning. Pink is the color of the peach blossom. White is the color of snow and represents the last snowflakes of winter. Finally, green is the color of the new grass that emerges in spring through snow.

There’s a typical song that is sung that day, called “Happy hinamatsuri”. I’m not sure to what extent it’s still singing or listening today, since it’s a very old song, but if you want to know how it’s I show you here a video with the song. If you activate the subtitles you can see the meaning of the letter. It’s a very simple song.

What do you think about this celebration?  Is there any special tradition in your country similar to hinamatsuri? 🙂 If you’re in Tokyo at this time and want to see in person how these dolls are, I recommend you go to the Keio Plaza Hotel, which has a free exhibition on the hinamatsuri and you can see an impressive and beautiful seven-level hinakazari. Some of its restaurants also serve a special menu for these dates. You have all the information here.

If you liked this article and want to know more about Japanese culture or Japan in March, don’t miss these articles too!