Daruma: The Amulet of Purposes in Japan 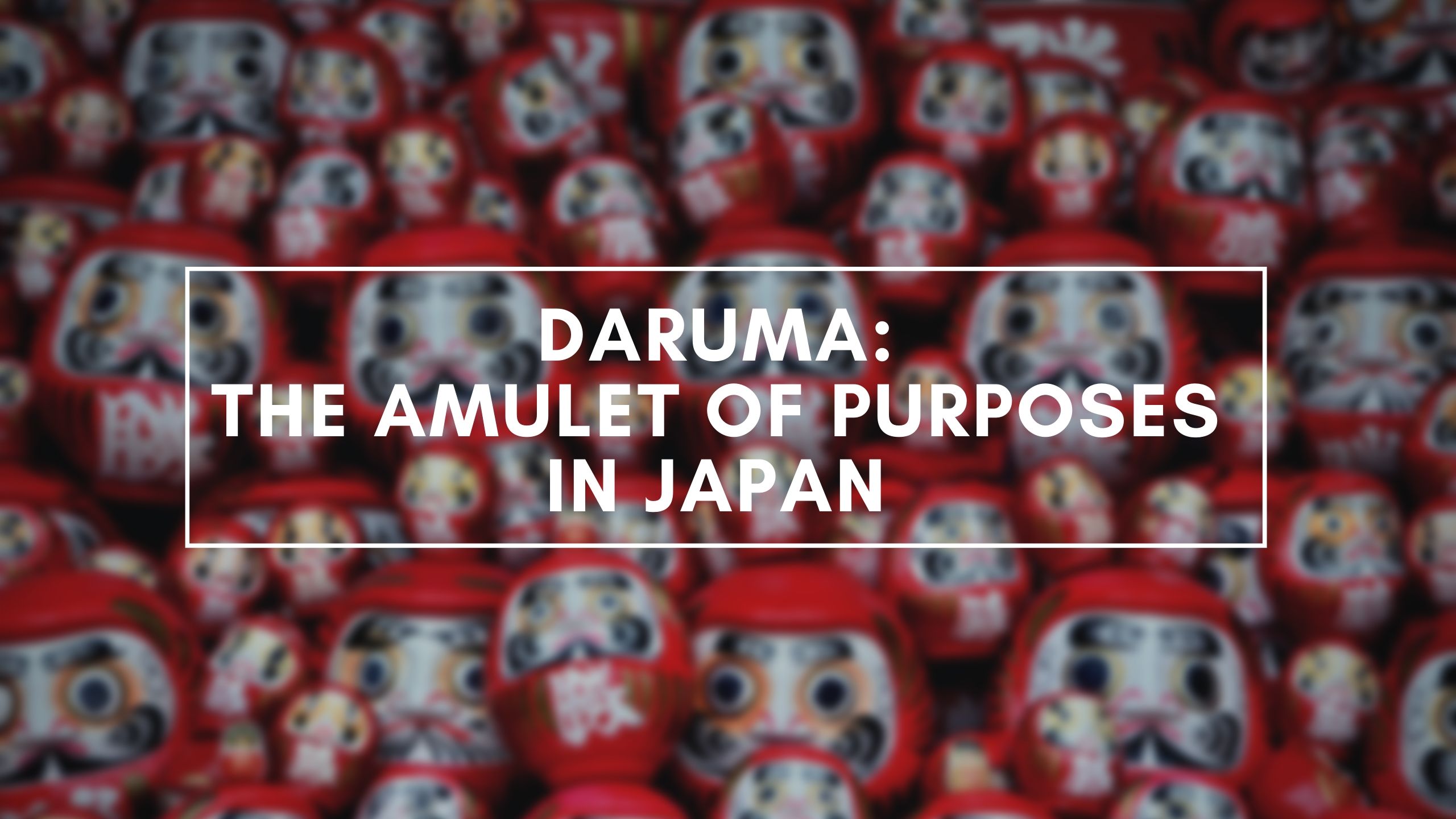 Surely many of you have seen a typical Japanese doll that is a small round figure painted red and gold/yellow with empty white eyes and usually with great big mustaches. Those of you who have traveled to Japan have surely seen them in souvenir shops and temples. And those who haven’t yet traveled to Japan have probably seen it on the Internet or even people who have it tattooed.

Normally, most of the Japanese amulets such as omamori or ema are simply lucky charms. People buy them hoping to be lucky in love, money, studies, etc. It’s hoped that simply by wearing those charms, luck will smile on us. But that doesn’t happen with daruma dolls.

What are Daruma Dolls? 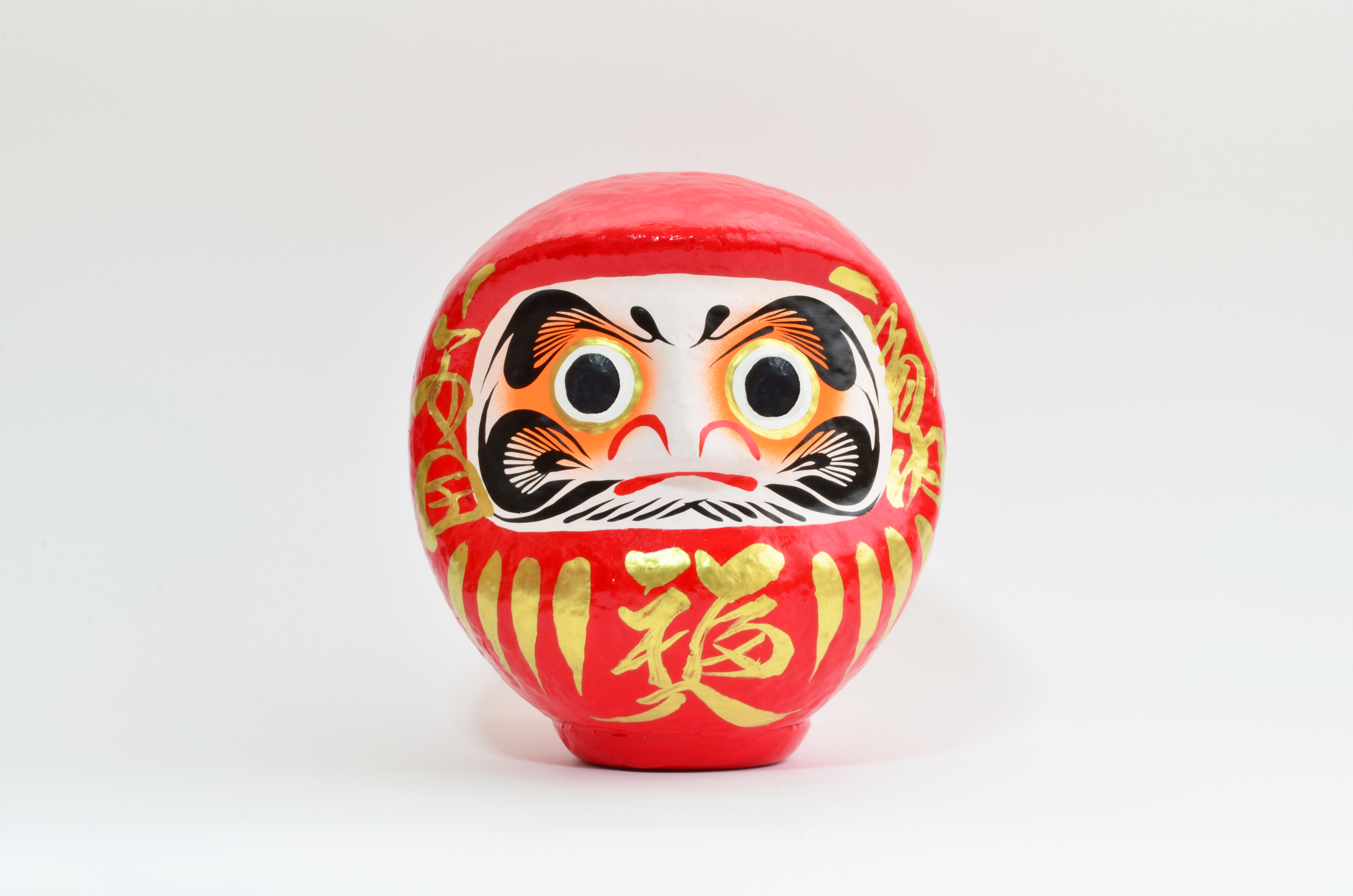 The daruma(達磨) or daruma doll is a Japanese amulet for motivation. The daruma have both eyes blank since it’s you who must paint their right eye while you think of a desire or a goal that you want to achieve. Once this wish has been fulfilled or this goal has been reached, his left eye is painted. It’s said that since the daruma wants to have both eyes, it will help you to achieve your goal. However, you can’t paint his right eye and just wait for your wish to be fulfilled. The daruma will give you strength to help you, but you must also work hard every day to achieve your goal. That’s why they are often placed in a visible place, as a reminder that we must continue to work hard. The daruma alone will do nothing. So you have to make wishes or achievable goals that you can achieve with work and dedication.

It’s supposed that if you have managed to achieve your goal, in addition to painting the other eye, from January 1 to 3 you have to burn it in some temple or shrine (from January 1 to 3, the temples and shrines of Japan have bonfires to burn the amulets of that year and buy new ones).

Originally they were made of wood, but today most are made of paper mache.

In Japan there is this saying, which means something like “Fall down seven times, stand up eight”. It’s a way of saying that you should continue fighting despite adversity.

Thanks to its rounded shape, the daruma doll never falls even if we move it. It always returns to its position. They never give up. The daruma dolls therefore are not limited to motivating you to strive every day, they also serve as a reminder or motivation that even if things go wrong or adversities arise, even if you fall, if you persevere things will end up going better, you will be able to overcome adversities, you will rise again.

The daruma dolls represent Bodhidharma, a Hindu monk who is considered to be the founder of Zen Buddhism. Legend says that Bodhidharma reached enlightenment after meditating for 9 years alone in a cave. After so long without moving, when he finally came out of the cave, his arms and legs fell from atrophy. Furthermore, the red color of the daruma is said to be from the clothes the monk wore during his meditation. 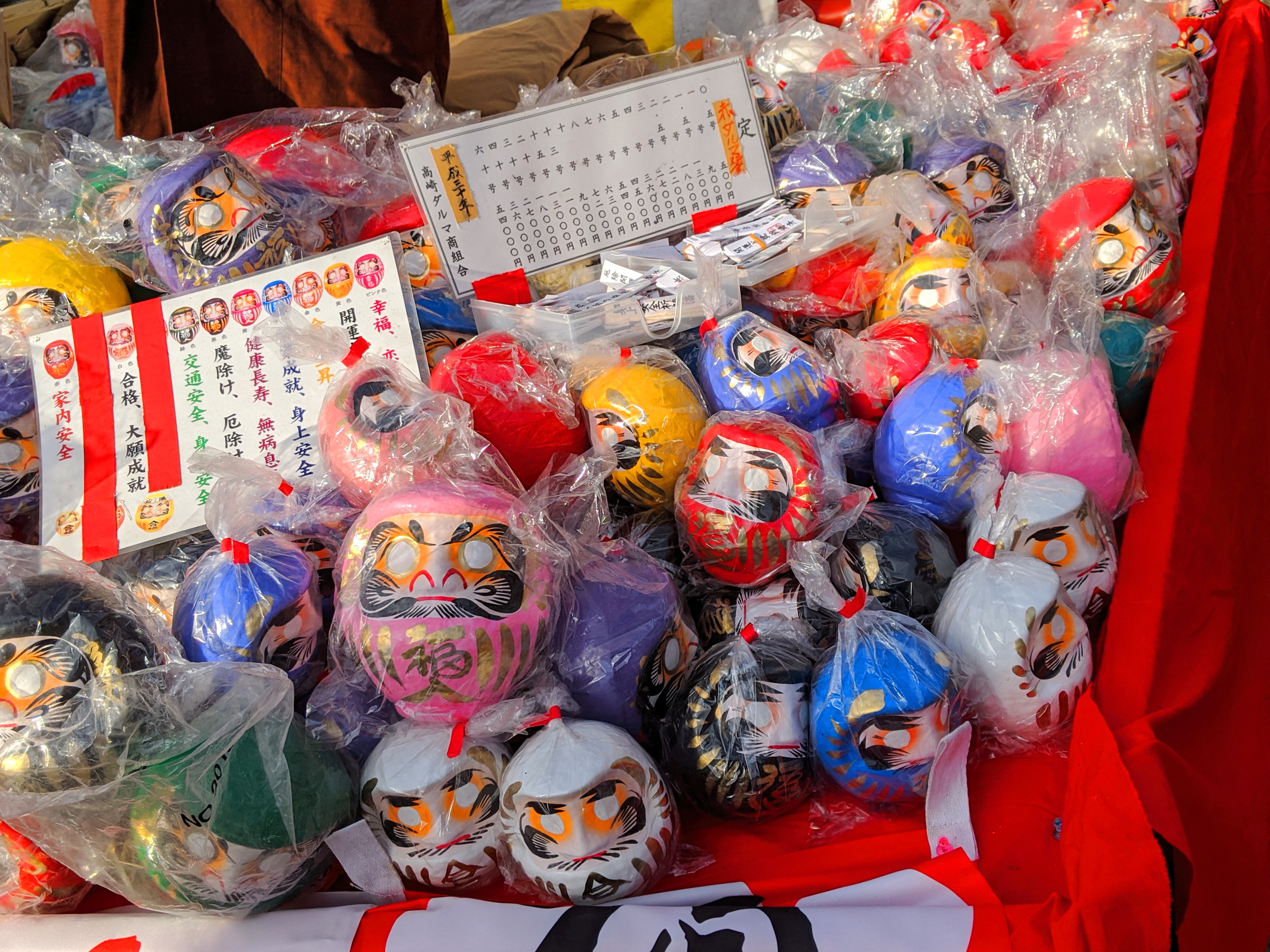 Although the traditional and most typical is red (and secondly, white), nowadays darumas of different colors with different meanings have been emerging.

Katsuō-ji Temple, the temple of the darumas 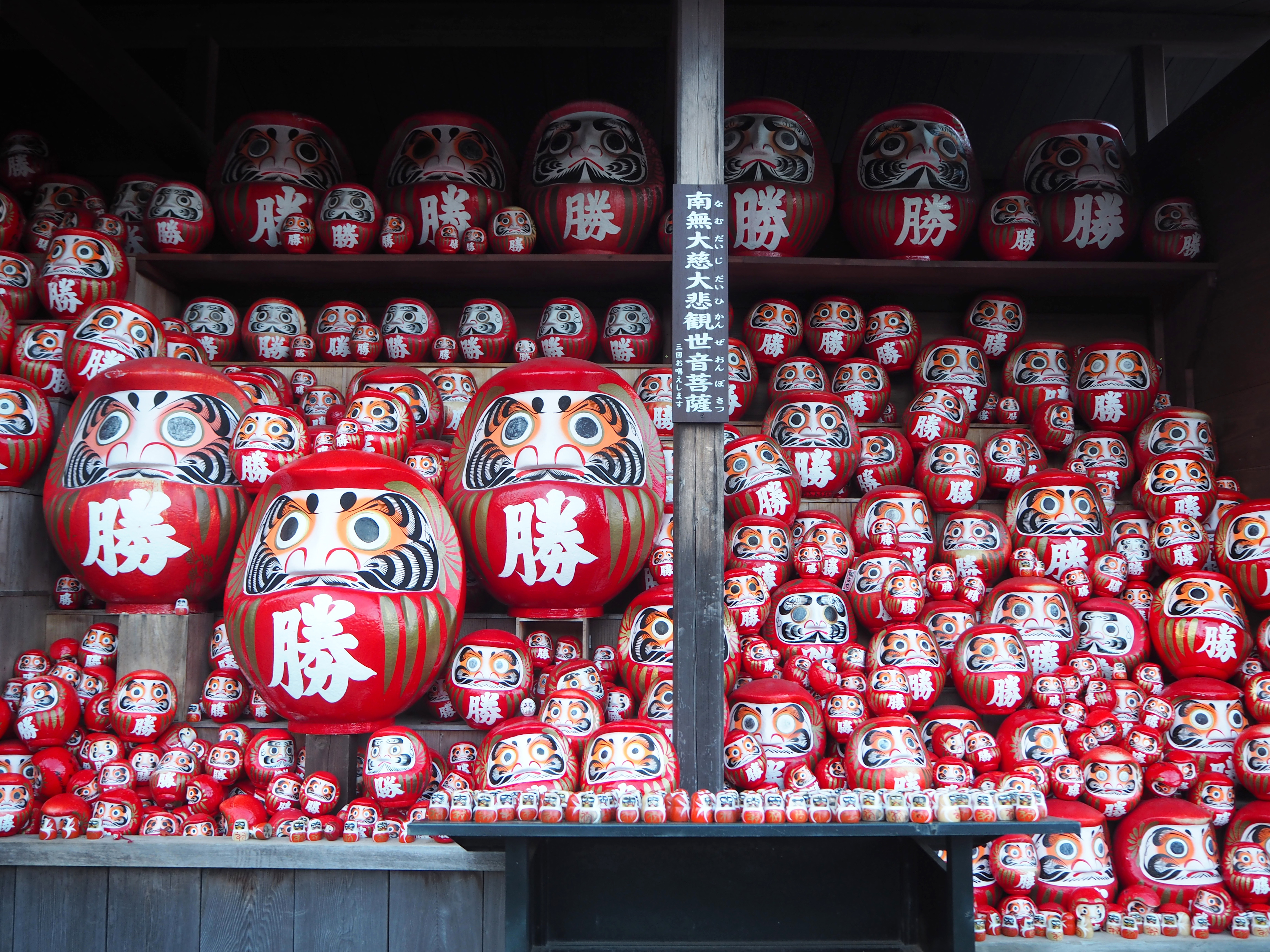 Between the mountains of northern Minō and a 40-minute bus ride from Osaka, we find Katsuo-ji (勝尾寺), a 1,300-year-old Buddhist temple. The name of the temple is linked to a legend that says that it was in this temple that Emperor Seiwa miraculously recovered from a terrible disease. The Emperor Seiwa named the Temple as Katsuo-ji Temple (王尾寺) in gratitude, but the kanjis that the emperor chose for the name could be read as “The temple that overcame the Emperor”, and as it could be a problematic reading from the temple they decided to change the emperor kanji (王) for the tail kanji (尾).

The temple is today known as ‘the temple of winning fortune’. Partly because of the legend, partly because the first kanji of the name means ‘victory’(勝) in Japanese, the temple became a popular place among those they looked for luck in diseases, battles, business or studies.

This link to victory and fortune made the temple begin to fill with daruma dolls and today they’re all over the temple, being one of the attractions of the place. If you are near to Osaka and you are looking for something different to visit, this may be a good option.

What do you think of the story behind those charms? Daruma it’s a souvenir that I always recommend to friends and costumers because I think it’s original and symbolic, and I like it more than a simple lucky charm of some temple (although I also like them).