Garbage Disposal and Recycling in Japan

Guide to live in Japan: How to take out the trash 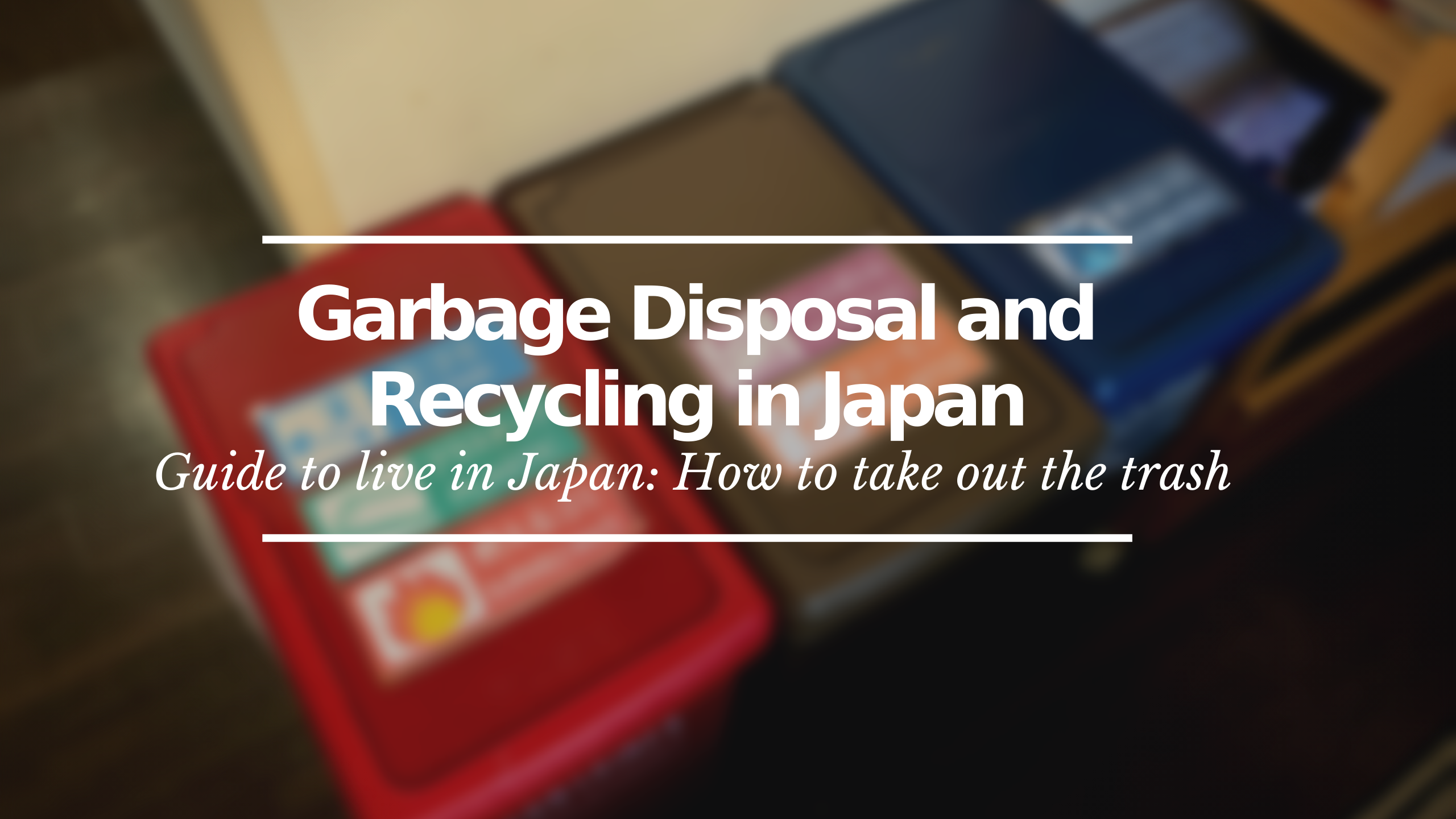 Yes, strange as it may seem, today I’m going to talk about garbage in Japan. Because as I have said before, in Japan it looks like they enjoy making everything difficult. However when it comes to the garbage and recycling system I agree with Japan.

Those of you who have come to Japan for a trip will probably have noticed that there’re hardly any trash bins. And the few that are in stations or convenience stores are divided into organic, cans and bottles and you must throw each product in the corresponding bucket. During a trip, where we probably eat in a restaurant and don’t generate much garbage, just going to a store from time to time may be enough. But when it comes to living in Japan it gets more fun. 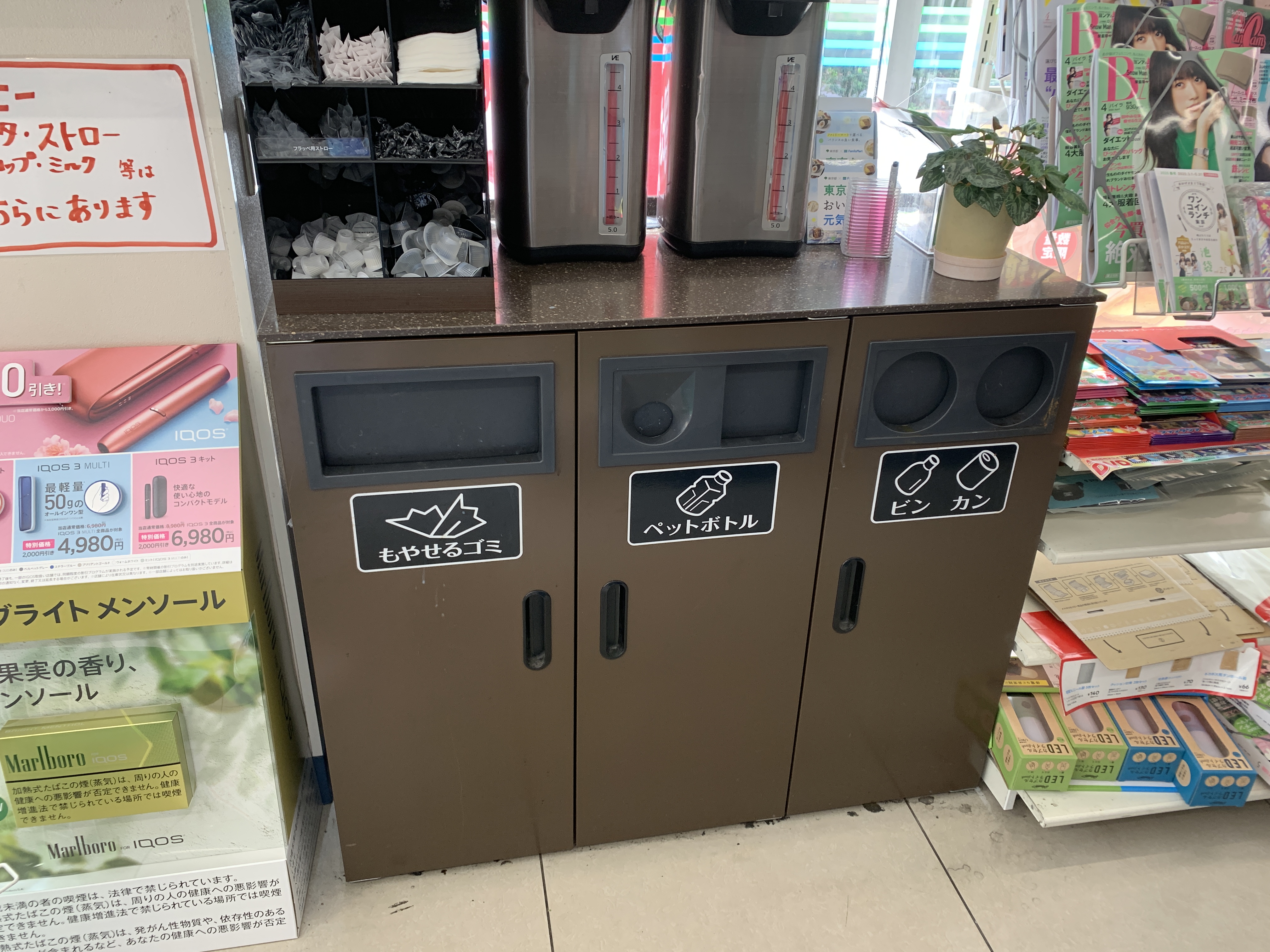 I don’t know exactly about how it works in all countries, but throwing away trash in my hometown is pretty simple. There’re containers all over the city every few streets and are classified by types of garbage: one for glass, another for paper and cardboard, plastic, organic, etc. Containers are always available so you just have to put the garbage bag in the corresponding container and that’s it, as simple as that.

Well, in Japan it doesn’t work like that. In Japan there’s a collection system and very strict recycling rules. It just doesn’t work to take the garbage out on the street the day you want. Depending on the day of the week, you must throw away one type of garbage or another. For example: Monday the organic one, Tuesday the cans and bottles, etc. If you take out the garbage on a day that’s not the correct one, they will not take it, and they may call your attention. 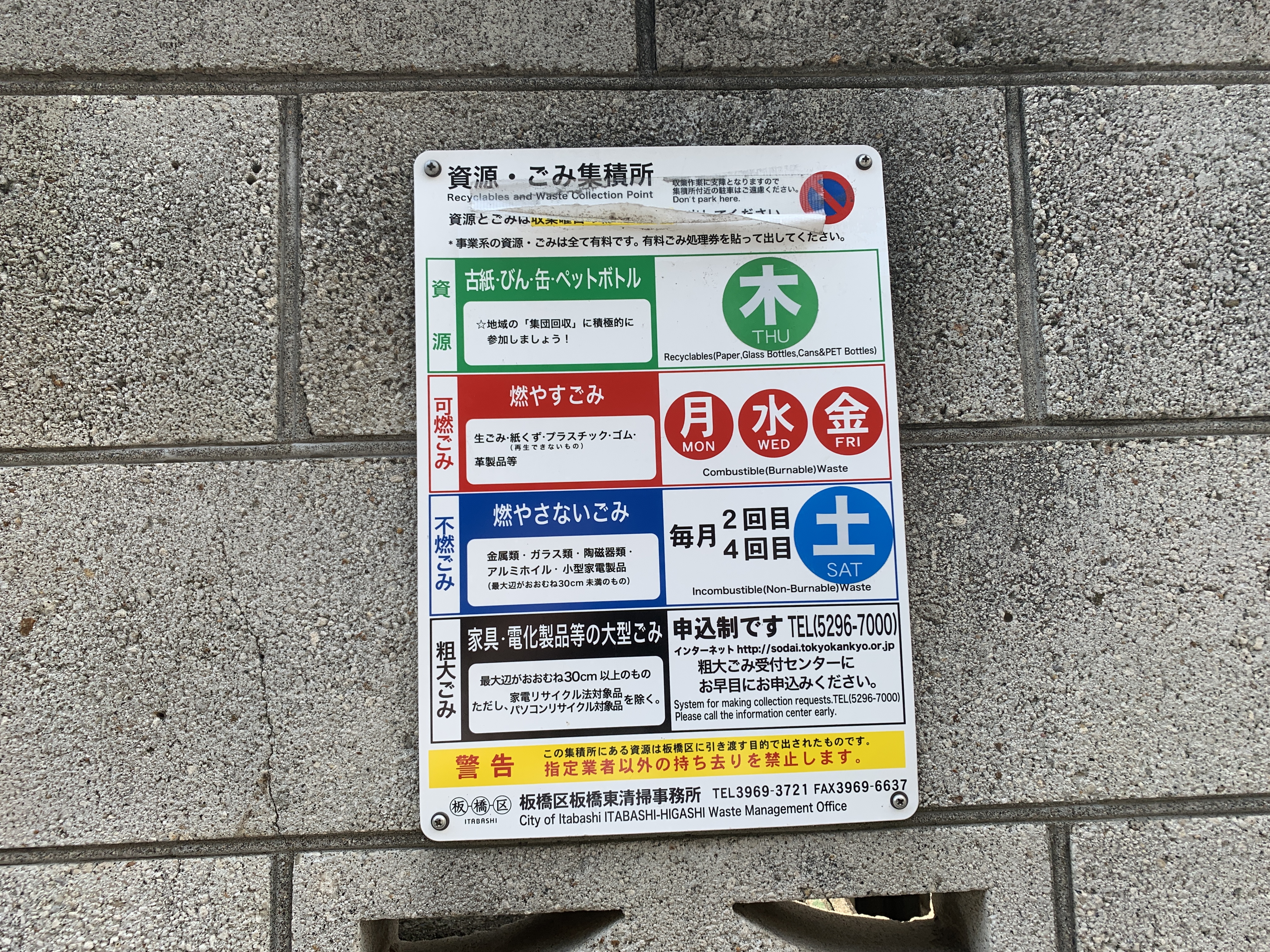 To make it even more fun, each city/ward has its own rules and days. This means that if you move from one area to another, the rules on how garbage must be recycled and what days each type of garbage must be collected change. However, in general the rules are similar throughout the country except for a few small differences. This article is a mini guide on how to separate garbage in Japan and the general rules.

Combustible garbage or moeru gomi (燃えるゴミ) in Japanese is basically everything that can be burned and that’s not in one of the other categories. It’s the main type of garbage (the one that is generated the most) and normally they come to pick it up two or three days a week, since in addition to being the fastest generated, it’s also the one with the worst odor. This garbage includes general things like food, paper and plastics that cannot be recycled (napkins, plastic bags, etc.) but also things like clothes that are no longer going to be used (if they are big things like bed sheets sometimes they ask you cut it into smaller pieces).

The recyclable garbage or shigen gomi (資源ゴミ) is the type of garbage that it can change the most depending on the war where you live, but generally the things that are recycled in Japan are mainly: plastic bottles, cans and glass bottles. They are taken out the same day (generally one day a week) but must be placed in separate boxes, as in the photo that I attach. However, be careful as you cannot simply put it in the box and that’s it but there are some rules to follow. For example, in plastic bottles you must remove the cap and the label and throw it in the combustible garbage and only put the bottle, and the cans must be washed beforehand so that no food remains. 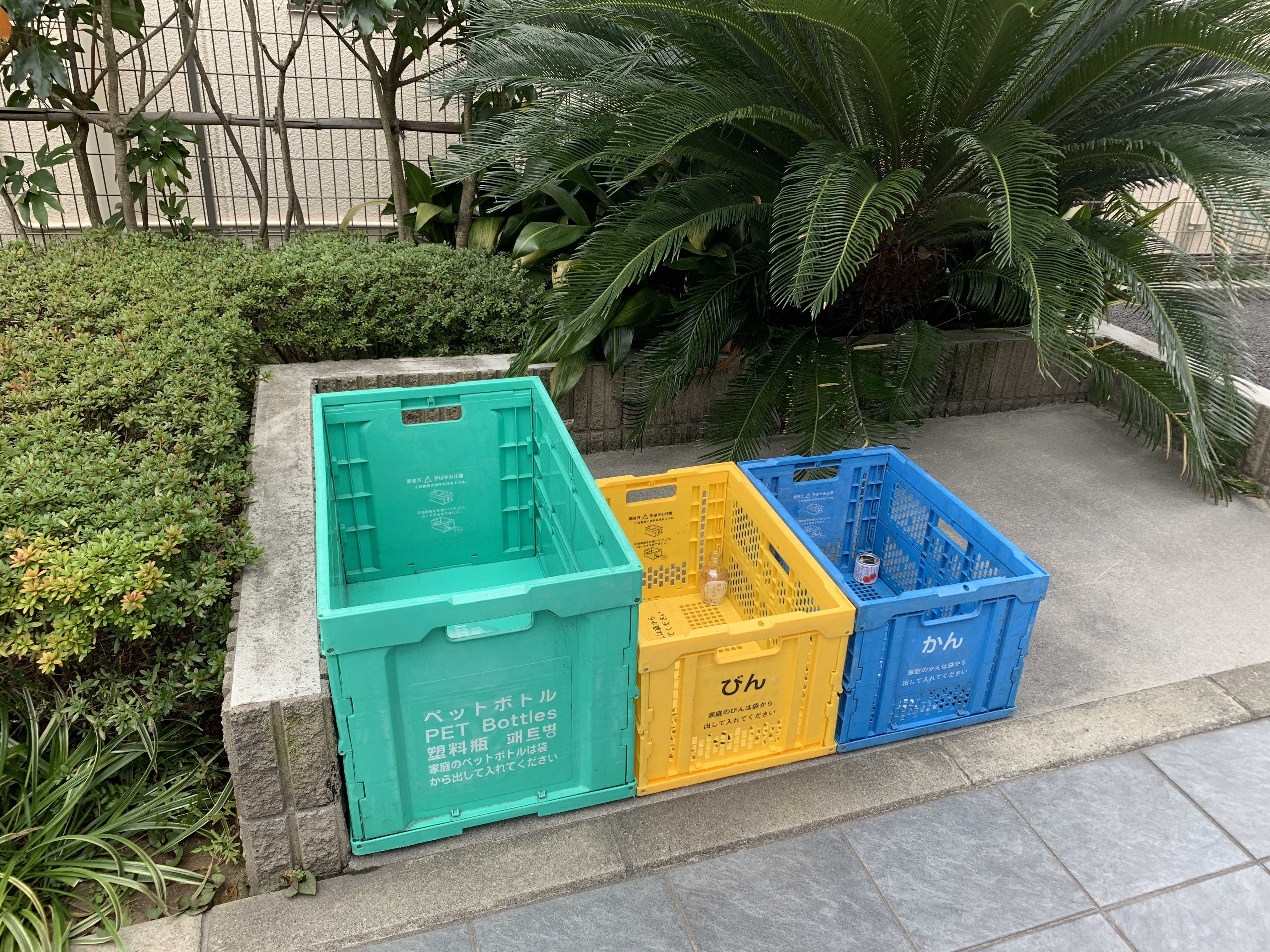 In many cities along with these 3 things that I have said, cardboard and paper are also collected. If they are small cardboard or a few sheets of paper you can throw it in the combustible garbage, but if you have large cardboard boxes or things like books, manga, or a huge amount of paper, what is usually done is tie everything with a cord and leave it to be picked up.

Although not in all, in some cities they make a distinction between ‘plastic’ and ‘plastic bottles’, so in those cases instead of throwing clean plastic containers and plastic bags into the combustible garbage they are put in a different bag and removed the same day as the recyclable garbage.

For garbage that cannot be burned or recycled there is the incombustible garbage or moenai gomi (燃えないゴミ). As it’s a type of garbage that doesn’t smell bad and doesn’t usually fill the bag quickly, it’s collected only twice a month (in some places once a month). Includes things like ceramic (mugs, pots, etc), glass (eyeglasses, light bulbs, glasses, etc), small appliances or kitchen items (pans, teapots, flat irons, spray cans, cutlery, etc)

Finally we have a special category for garbage that is too big, called oversized garbage or sodai gomi (粗大ゴミ) in Japanese. This is, in my opinion, one of the most difficult for foreigners living in Japan. First, because the definition of what they consider super large can change depending on the city (although they are usually things over 30cm long). Second, because you have to request that they come to pick up the garbage and pay a fee.

The process is the following: you have to call the local garbage disposal number and explain what you want to throw away and they will tell you a day and a date where they will go to pick up the garbage, and they will also tell you how much you have to pay. But the way of paying is also special. It’s done through stickers that you have to buy in one of the conbinis in the city/war. You must buy it in a conbini that is within the city where you live. You cannot, for example, buy it in the conbini next to your office (unless you live next to the office). There are different types: A, B, C, etc. and each type has a different price. When you call to request the pick up they will tell you: buy two A and one B, or buy two B, etc. Once purchased, you must take out the trash the day you have been told by placing the sticker or stickers on the trash.

Where and when to throw garbage in Japan?

Many of you will be thinking: ok, I get about the classification of the garbage. But if there are no containers, where do I throw the garbage? Do I leave it in front of the door of my house? Not exactly. This depends on where you live, but as a general rule, there’s a kind of “garbage pick up station”. Each house has its assigned station or place, so you should ask the owner of the house or the company that rents you the apartment where you must throw your trash. Typically, these “garbage station” are a designated place on the street. They’re usually easy to recognize because they have a kind of blue net, since you must leave the garbage bags under that net (to try to prevent crows, cats or other animals from breaking the trash).

You have to be careful with this issue, because the Japanese (especially older people) take very seriously where you should take out the trash, and they get super angry if you mistakenly throw your trash in ‘their place’ and not ‘yours’ ( I speak from my own experience).

Some floor blocks have a kind of metal box on the door of the building and can be left there. And although less common, in large apartment blocks there’s sometimes a designated area (like a kind of garage) where you can leave the garbage the day and time you want and they will come to pick it up on the corresponding day (but this, in my experience, is less usual) 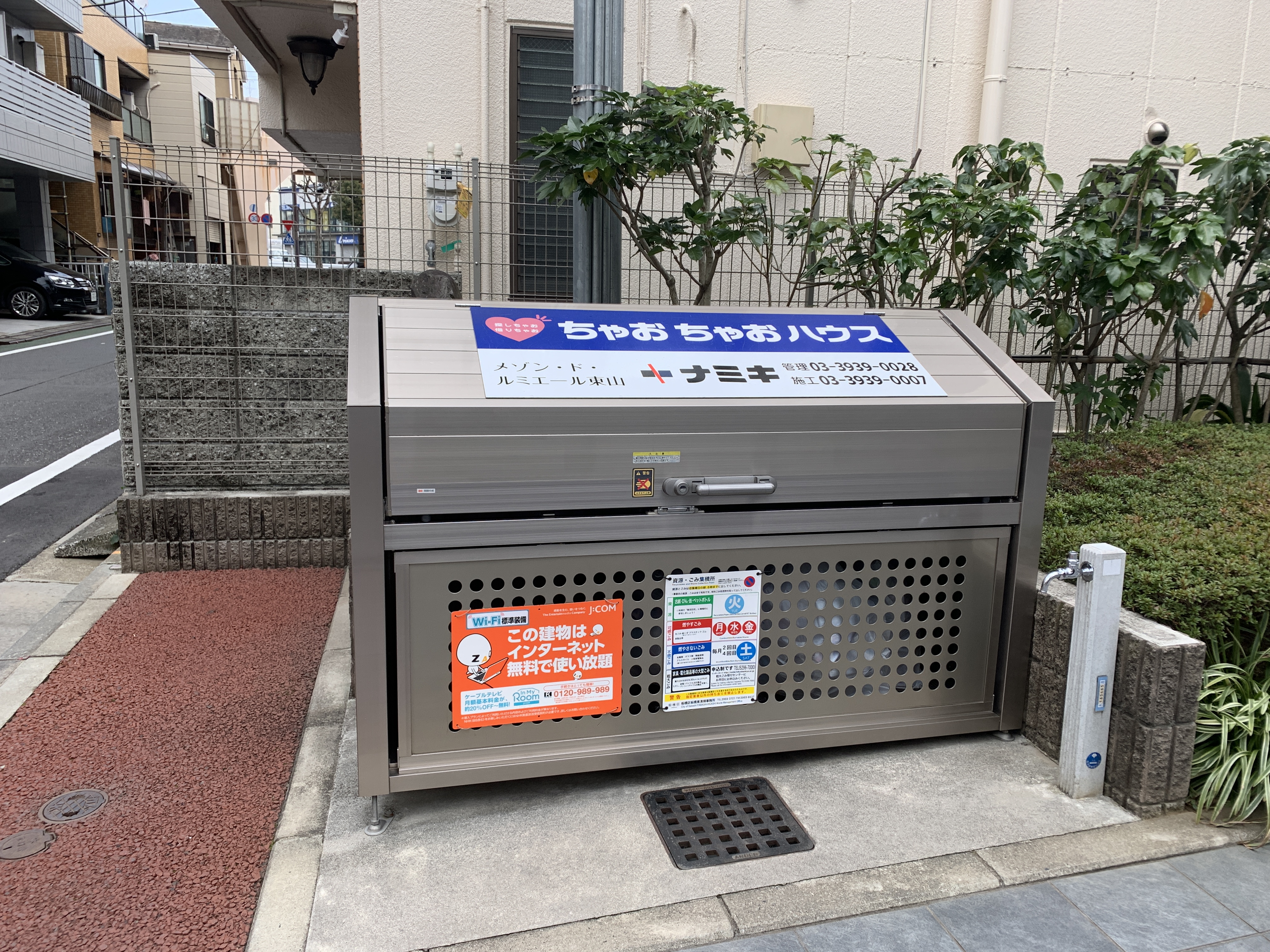 As I have explained, the rules usually change depending on each neighborhood. But generally the garbage is picked up early in the morning, around 8am. Although sometimes it can be from 8 to 10 or even from 8 to 12. If you aren’t going to get up early in the morning, you can also take it out the night before, although you have to be careful. In my three years living in Japan I have never had problems with taking out the garbage at night and it was my Japanese house mates who told me that if it was going to be difficult for me to take out the garbage in the morning, I could do it the night before. But I have read that there are some neighbors who can get angry if you do that. So see if there are more people doing the same and if not, unfortunately, you will have to get up early to take out the garbage.

You also have to be careful about throwing the garbage in the corresponding categories, because it’s another thing that raises the anger of your neighbours if you don’t do it correctly. In Japan, the garbage bags MUST be transparent to be able to see the what’s in the bag since who are responsible for collecting the garbage review the content before. If there’s something that shouldn’t go in that bag, they don’t take the bag and they leave you a sticker that my friends and I call “the sticker of shame”, since then the whole neighborhood will know that you have thrown the garbage wrong.

I think this is the main thing you should know about taking out the trash in Japan. I hope this information can be useful and help you. If you have any questions or queries, do not hesitate to ask me and I will try to help you! If you want more information about things that may be useful to you if you plan to live in Japan or are living in Japan, you can check these articles too!

What is Teikiken, the Commuter Pass in Japan How to save money on transportation in Japan jw-webmagazine.com

5 Must-Have Items for Remote Workers who Work from Home in Japan Build the comfortably remote work environment at home! jw-webmagazine.com 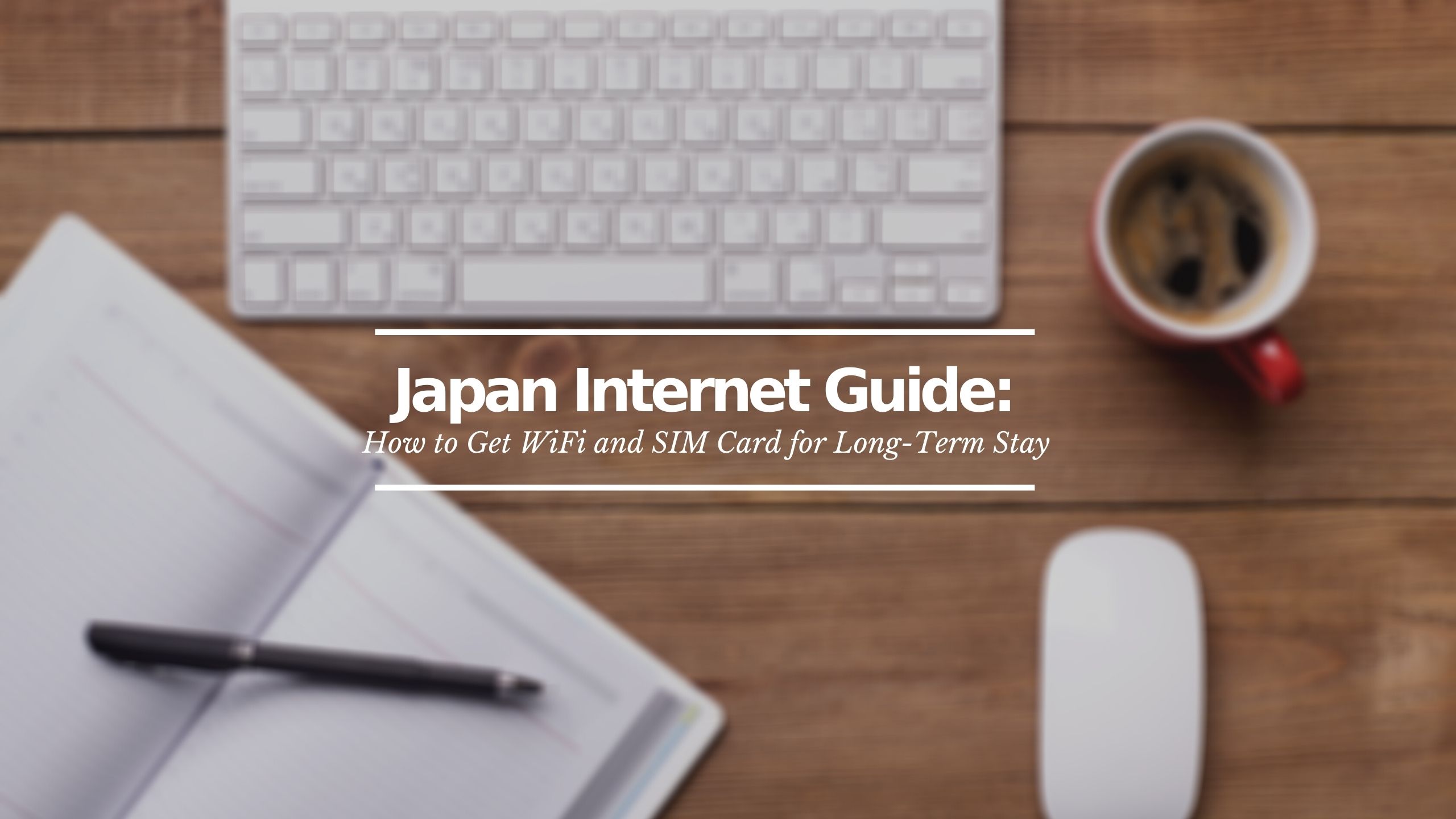