5 Japanese alcoholic drinks you must to try 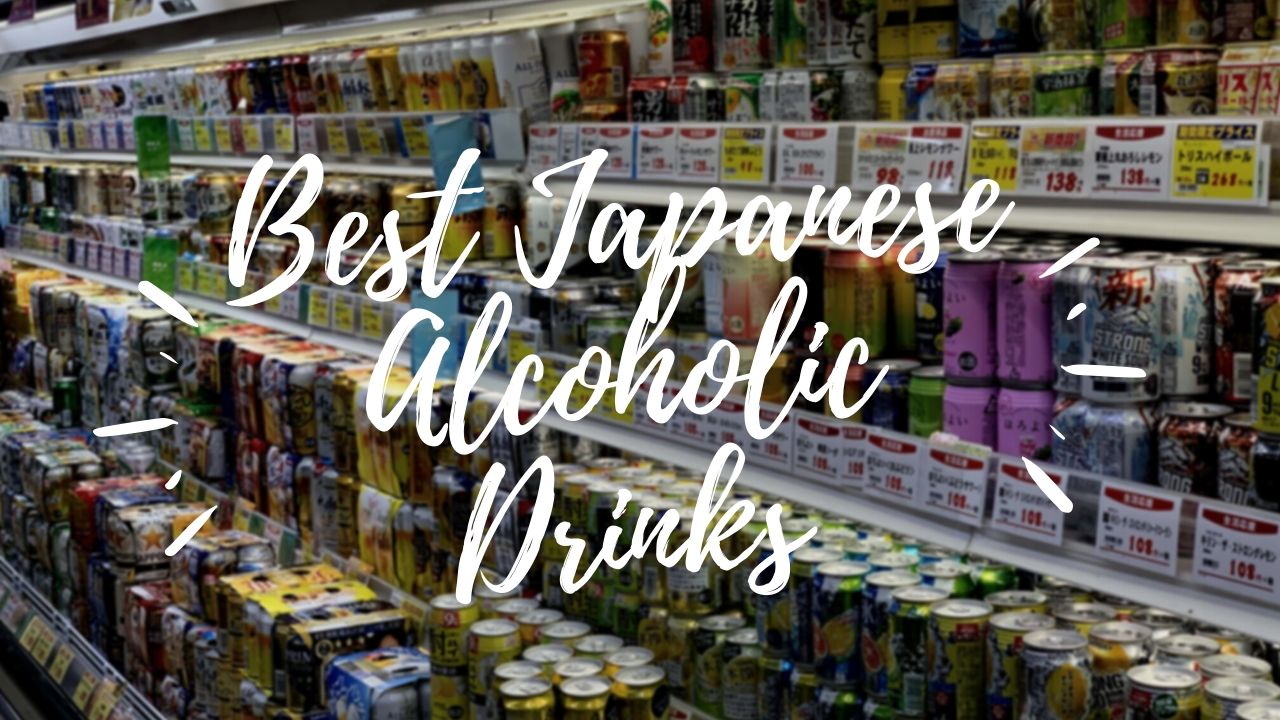 When you talk about Japanese Alcohol beverages, the first (and sometimes the only) thing that comes to mind of foreigners who have never lived in Japan is known as “sake.” But in reality, Japan has a good variety of alcoholic beverages.

First of all, a little clarification: what’s outside of Japan is known as “sake” is actually “Japanese Alcohol”. Japanese Alcohol or nihonshu (日本酒) in Japanese is a type of rice-based liquor, which is why sometimes it’s translated as “rice wine”. The word sake in Japanese means alcohol, in general. Probably for marketing, internationally it has become popular as “sake” only to that type of Japanese liquor, but for example, whiskey is a type of ‘sake’ in Japan. 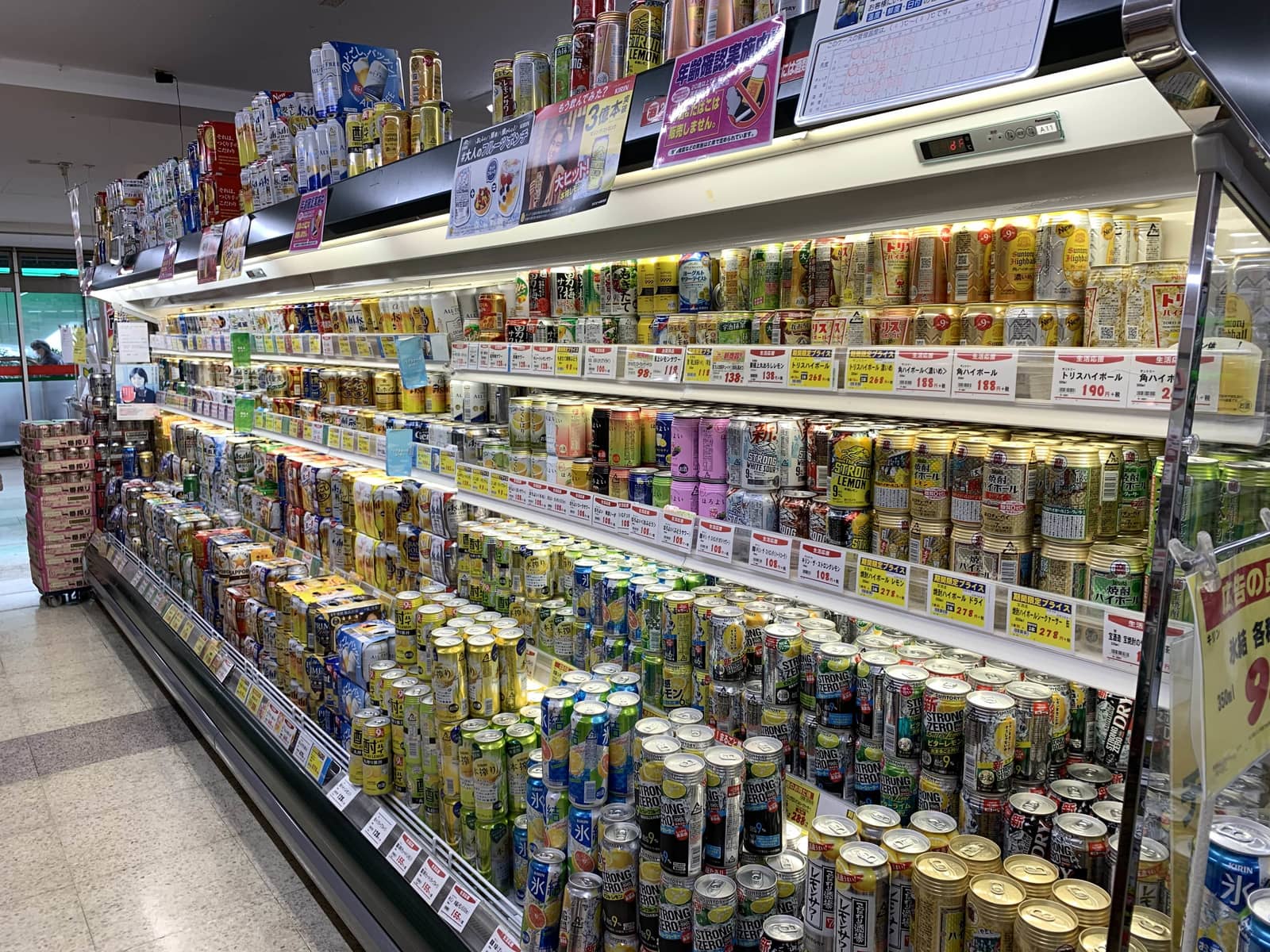 One of the most sought after gifts in Japan is just a bottle of Japanese alcohol, and many want to try this alcohol during their trip. And obviously, ‘sake’ is part of Japan’s culture and cuisine and I understand that people want to try authentic Japanese liquor in Japan. But in this article, I would like to introduce you some typical alcoholic drinks in Japan in addition to the Japanese liquor so that if you feel like going to a Japanese izakaya or bar one night you can try other options. From very soft and sweet drinks to some stronger ones, I will try to offer a variety for all kinds of tastes.

But before starting with the list, I would like to talk to you about shochu. Shochu (焼酎) is a distilled liquor (like vodka) and it can be made from rice, barley, or sweet potatoes. Sometimes it’s made from other ingredients but this three are the most common. If you’re wondering the difference between ‘sake’ or nihonshu and shochu, mainly as I said shochu is a distilled liquor while nihonshu is fermented, more like wine. The second big difference is the alcohol content. Shochu is stronger than nihonshu.

Japanese liquor is usually drunk alone or lowered with water, but it’s less common to drink shochu alone. On the contrary: there’re many drinks based on shochu. That’s why I wanted to tell you about it before I started explaining the different best alcoholic drinks in Japan. 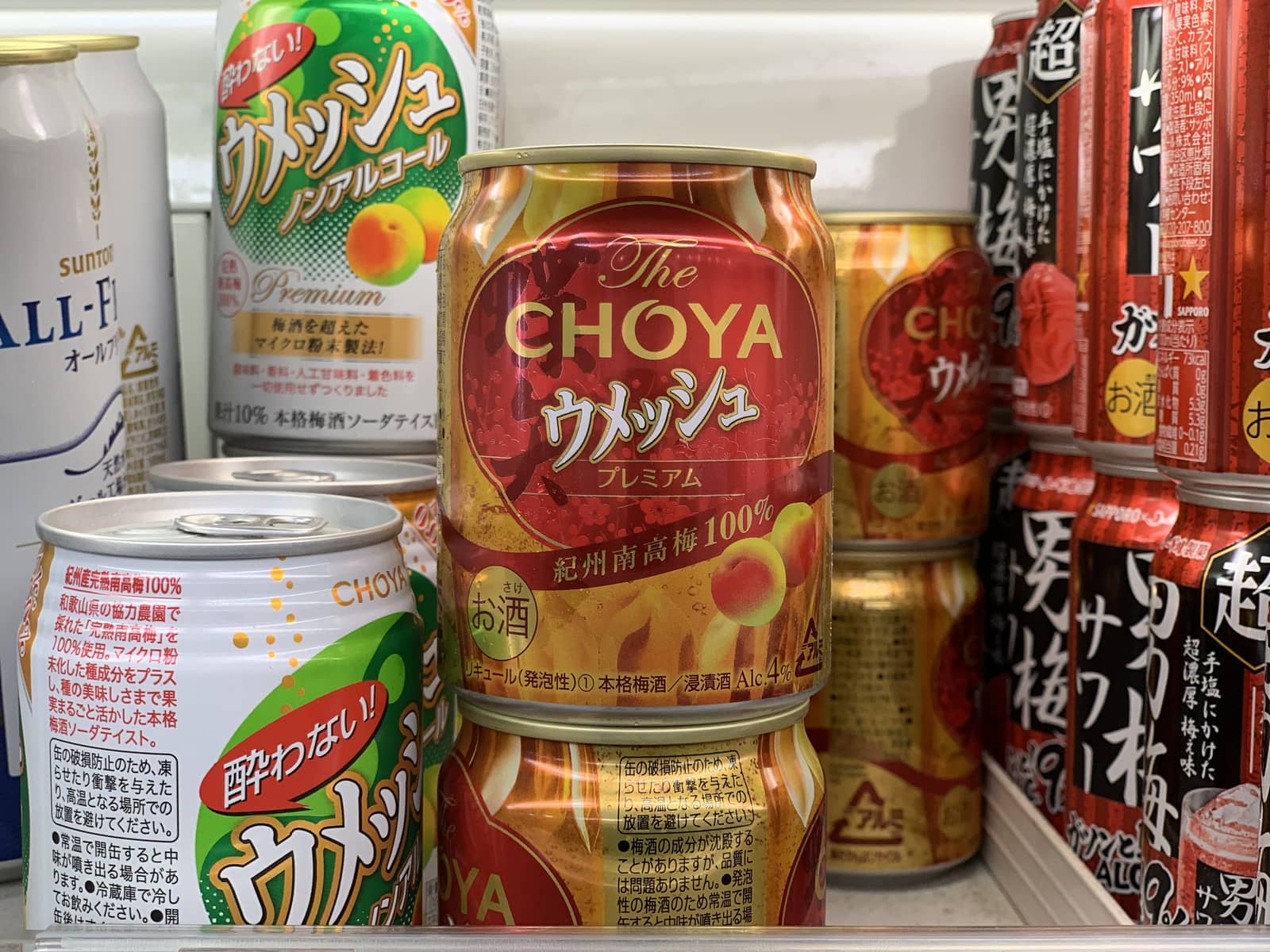 If you don’t mind/ With your permission, I will start with my favorite alcohol drink in Japan: umeshu (梅酒). Umeshu or plum liquor is made with steeping plum and Shochu (and sugar). Sometimes it is translated as “plum wine”.  There’re different types of umeshu, some stronger with a taste more similar to whiskey. But most are usually very soft and sweet, and easy to drink even with ice only. But if it seems too strong you can also mix it with soda. As it’s sweet, it doesn’t seem that you are drinking an alcoholic beverage, so you have to be careful. 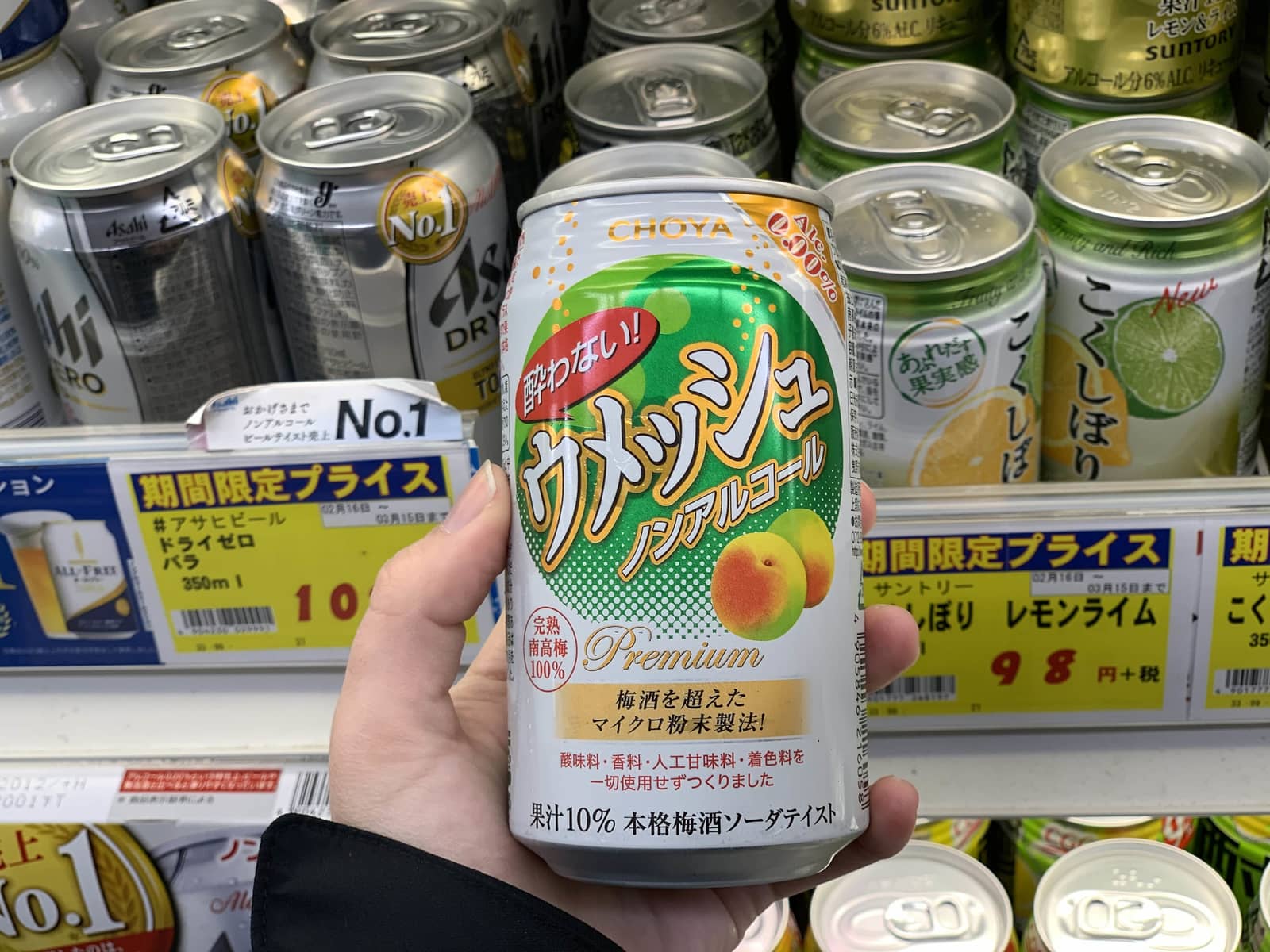 If you are curious about this liquor but you don’t like to drink alcohol, you also have a 0% alcohol version, suitable for all audiences. As umeshu is really sweet,  this drink tastes more like juice than an alcoholic drink. 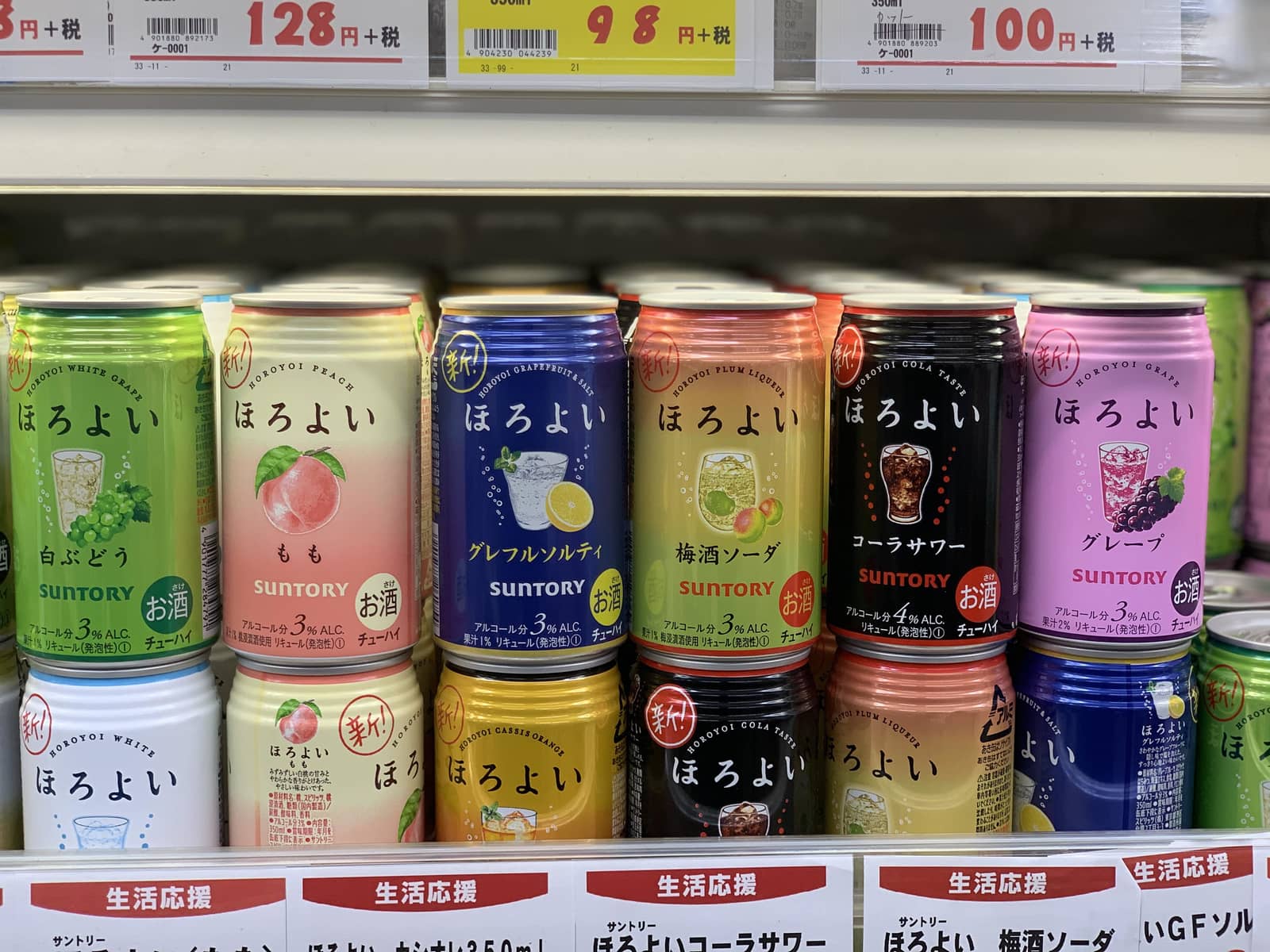 Suntory’s “horoyoi” is a type of alcoholic drink with shochu as a base and then some other flavor. The amount of shochu is quite low and graduation is only 3%, so they’re very soft and taste more like fruits than alcohol. It’s also another of my favorite drinks here. Depending on the season they have some flavors or others (watermelon in summer, tangerine in winter, etc) and every few months they take out new flavors, and I love to try the different flavors that come out. Although so far my favorite is peach. So if you want to try one but you are wondering what flavor to choose, there you have my recommendation. 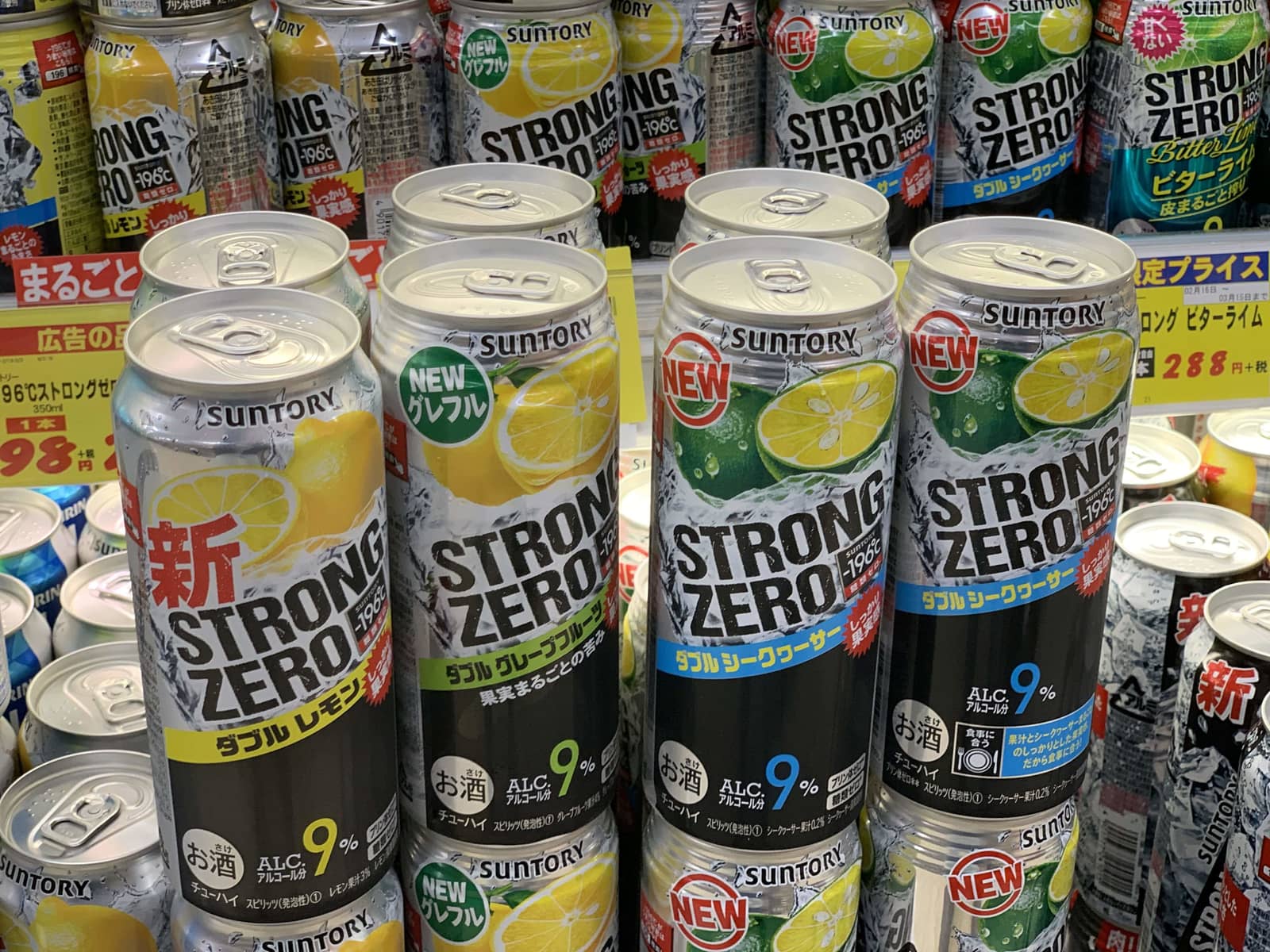 In my opinion (although I think it’s shared by many, including my friends who have come to Japan on a trip) Strong Zero is one of the strongest alcohol drinks you can have in Japan. With a shochu base and a 9% graduation, it would become a stronger version of the horoyoi. Although there’s less variety of flavors. Normally there’re the classic lemon, lime, or citric flavors. They don’t usually have sweet flavors.

Strong Zero it’s also a specific alcohol drink from a company, Suntory, but Kirin also has a similar drink, although with a little less graduation (5%). If you want to try it but you don’t want to drink something with a lot of alcohol, Kirin’s is a better option. Or the classic ‘Lemon sawa’ (lemon sour) it’s an intermediate option (7%). 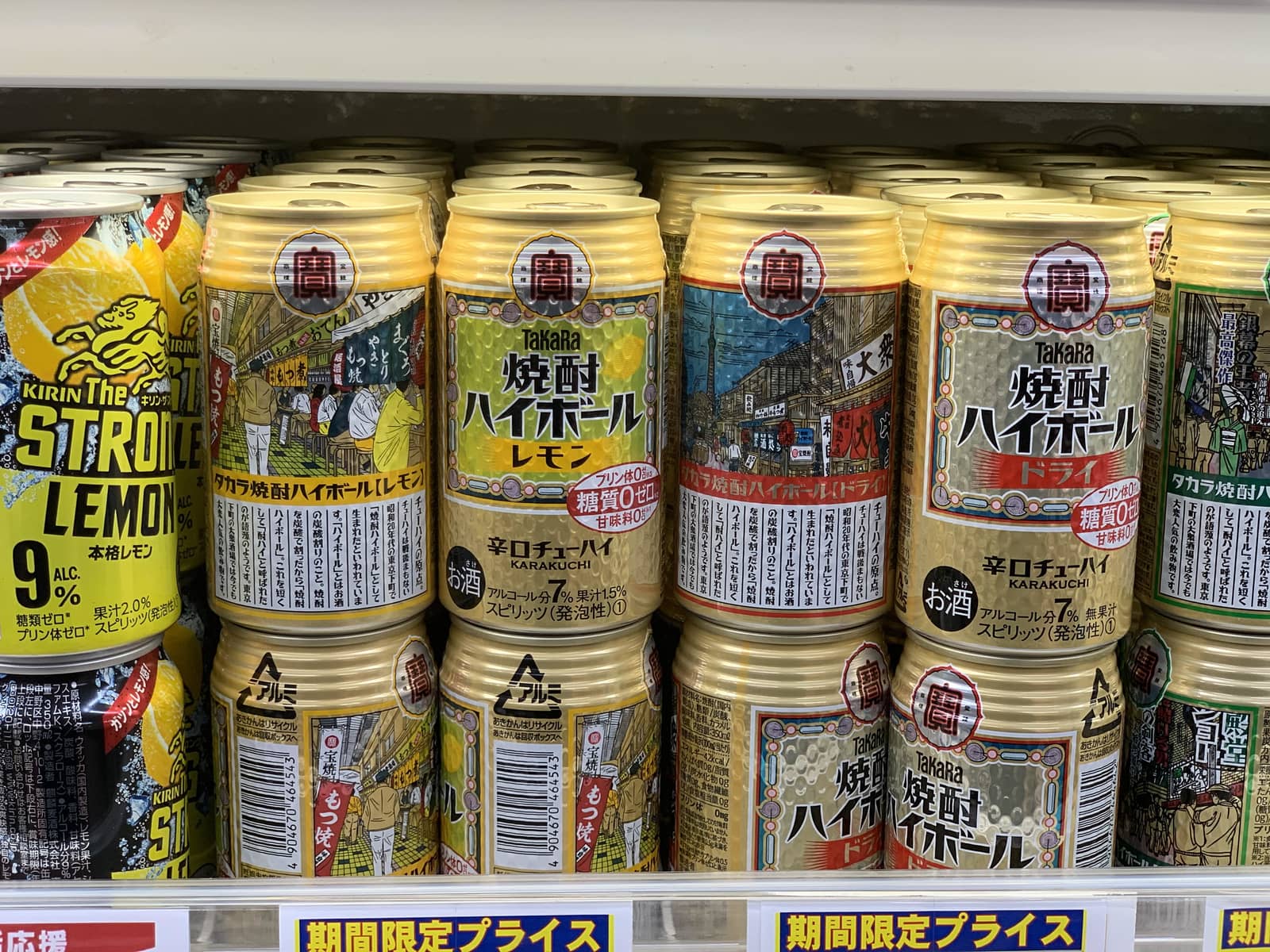 This’s probably the most typical drink at company dinners and the most requested in bars and restaurants along with beer. It’s mainly whiskey and soda, although there’re variants, such as whiskey and water or whiskey and Japanese oolong tea or something more familiar to us, which is whiskey with coke (but this one is not really popular among Japanese).

How to Make Highball Find out about Japanese Whiskey Highball jw-webmagazine.com 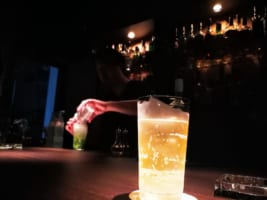 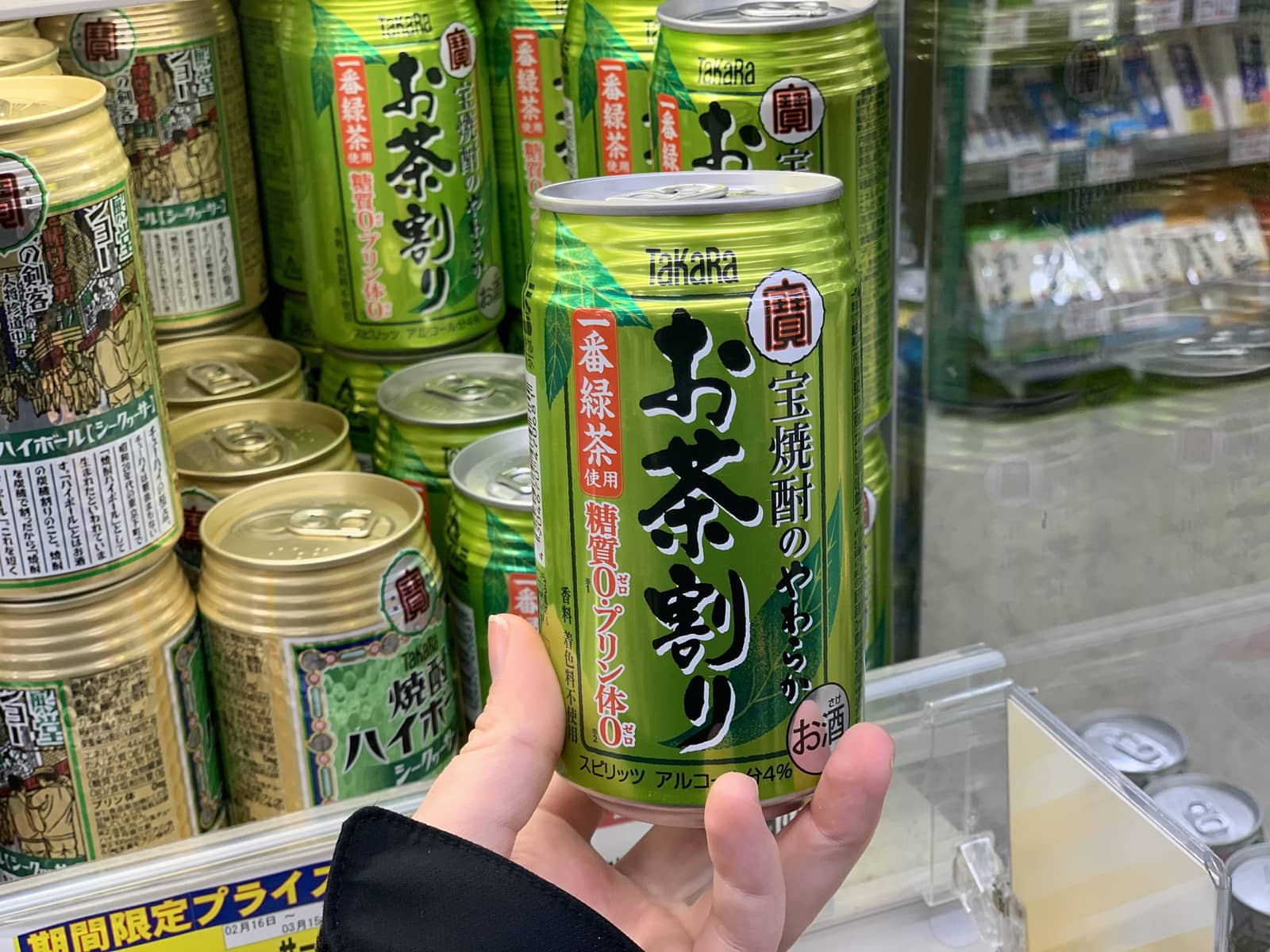 If you want to try something completely different and Japanese alcohol, this is your best choice! It’s also alcohol with shochu as a base, with Japanese green tea! I think it’s a perfect combination of two typical Japanese drinks. It has a 4% graduation alcohol so it’s not very strong either. 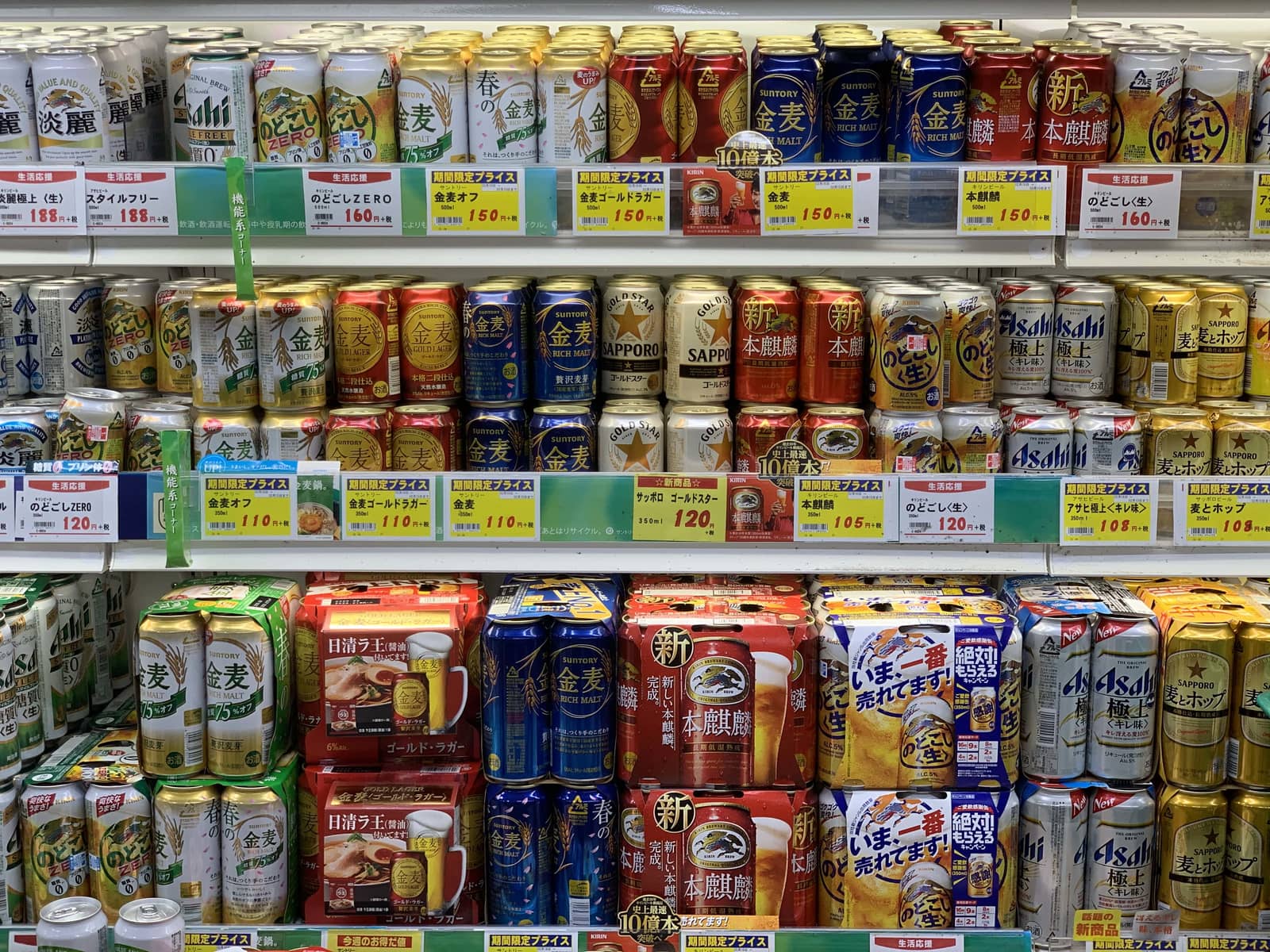 I know that beer is not traditional Japanese alcohol, but in Japan, there’re several brands with a really good beer that I think is worth trying. Some of the most famous are Kirin, Yebisu, Sapporo or Asahi. A curiosity is that in Japanese restaurants when a beer is served, they remove the foam that has left the beer itself and there’s a different supplier where ‘quality foam’ comes out. This foam is much better than normal foam and its texture is also much better quality. Just by seeing one foam and another you can tell the difference. In addition, they don’t serve beer in any way but there’s a careful proportion and it’s already stipulated how much there has to be beer and how much foam.

In this article, I have put photographs of beverage cans that can be found in any supermarket or conbini for a cheap price, but if you want to have a totally authentic local experience, I recommend you go to an izakaya! If you’re afraid to go alone, you can join one of the multiple hopping tours that take place in the main cities such as Tokyo, Osaka and Kyoto. I personally joined a food&drink tour led by Japan Wonder Travel recently in Kyoto and I loved it! Book the tour now with our coupon “jw 2019” and get 10% discount!!

If you want to know more about japanese gastronomy and love exploring the night life side of Japan, you may like check out these articles, too!
What is Izakaya?How to enjoy izakaya in Japan like a local jw-webmagazine.com 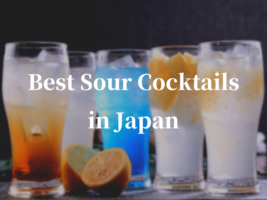