The History of Sushi

Discover the origins of sushi: from the mountains of Southeast Asia to Japan! 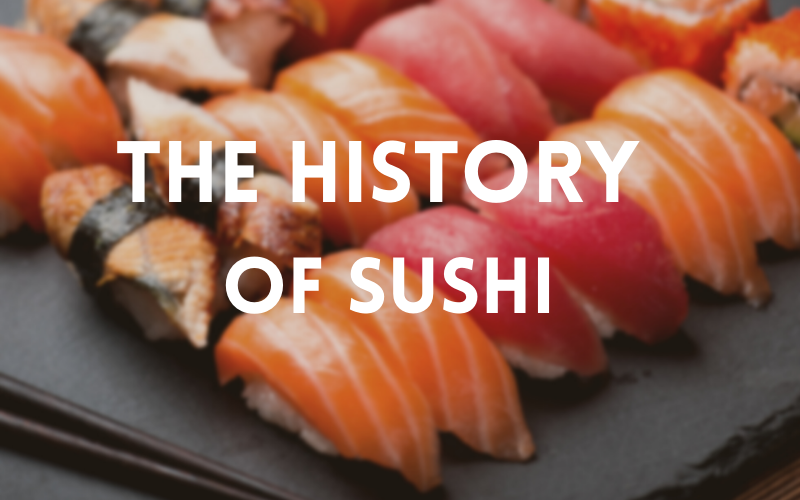 Sushi is undoubtedly Japan’s most famous dish. Almost everyone knows what sushi is, even those who have never eaten it. It’s one of the first things that anyone would come up if you ask them to say something they know about Japan.

With a history of over 1,200 years, sushi has its roots are said to come from Southeast Asia. This may come as a surprise to many people, but originally sushi is a preserved fish food that developed among the mountain people of Southeast Asia as a means of preserving fish for long periods of time, as it was difficult to obtain frequently due to its high price. Fish were preserved by marinating them putting it inside a mixture of rice and salt to ferment. At first, people would only eat the fish without the rice (they threw the rice!!) and it was a dish mostly only available for the upper-class people.

In this article we are going to take a trip back in time and explain the history of sushi, from its origins as preserved fish to how it has reached the sushi we know today, and the adaptations that have been made abroad. Want to join us on our journey? Read on!

The Origins of Sushi 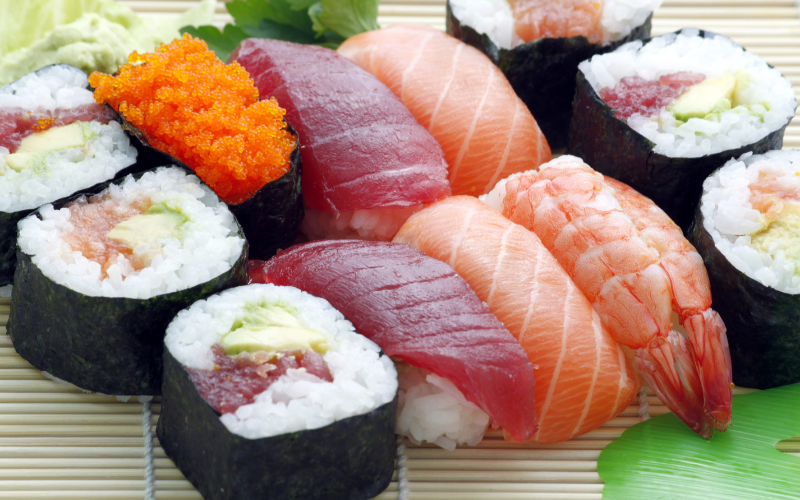 As many other things, Sushi was introduced in Japan from China around the Nara period (710-794) together with the introduction of rice cultivation. Sushi at that time was called “nare-zushi,” which was made by marinating fish in salt and rice and letting it mature, and is believed to have been eaten as a preserved food.

In the Kamakura period (1185-1333), sushi appeared as a processed product made from leftover fish, but is not until the Muromachi period (1333-1573) when rice became a common food among the general population and the custom of eating sushi with rice was born.

In 1603 Tokugawa Ieyasu took control of all of Japan and moved the capital of Japan from Kyoto to Edo (the current Tokyo). It was the beginning of the Edo period (1603-1867). The city of Edo was filled with people, stores, restaurants and nightlife. Nigiri-zushi, which could be eaten immediately after made it, emerged from the standing food stalls that were popular at the time, and quickly became popular. Nigiri-zushi is made by lightly compressing sushi rice and combining raw or cooked seafood on top, often with ginger or wasabi (Japanese horseradish) in between. With this kind of historical things sometimes it’s difficult to know exactly who was the first person who created it, but the creation of the modern nigiri sushi is attributed to Hanaya Yohei. Hanaya Yohei opened her first sushi stall in 1824 in the Ryogoku distric. For those that aren’t familiar with Tokyo, the Ryogoku district it’s near to the Sumida River. It’s said that as he was able to get fresh raw fish from the bay, it was no need to ferment it and the sushi could be made in a few minutes.

By the end of Edo period, inari-zushi and maki-zushi (rolled sushi) had also appeared, and the popular sushi that we know nowadays was born. It was also during this period that people started to use vinegar in the rice instead of letting it ferment. This type of sushi (nigiri-zushi, inari-zushi, maki-zushi,etc) are called Edomae-zushi.

In the 1890s, ice production was commercialized, making it easier for sushi restaurants to obtain ice, and many were equipped with electric refrigerators. This improved the environment for handling fresh fish and shellfish, making it possible to use raw fish (sashimi) as a topping, and the number and variety of fresh sushi items increased.

The Great Kanto Earthquake of 1923 caused sushi chefs to leave Tokyo, and it’s said that is when Edomae-zushi first spread throughout Japan. After the war, in 1947, an emergency order was issued banning all restaurant business, and sushi restaurants were no longer allowed to open. As a countermeasure, an  union of sushi restaurants in Tokyo negotiated with the government to officially allow them to operate as consignment processors, exchanging one cup of rice for 10 nigiri sushi. This measure spread to sushi restaurants nationwide, and the entire nation sushi scene became dominated by Edomae-zushi. Furthermore, due to the shortage of supplies after the war, sushi was made using rice vinegar instead of sake vinegar, becoming a major product.

During the period of rapid economic growth after World War II, yatai (food cart) restaurants were abandoned for hygienic reasons, and sushi restaurants became a category of upscale restaurants. 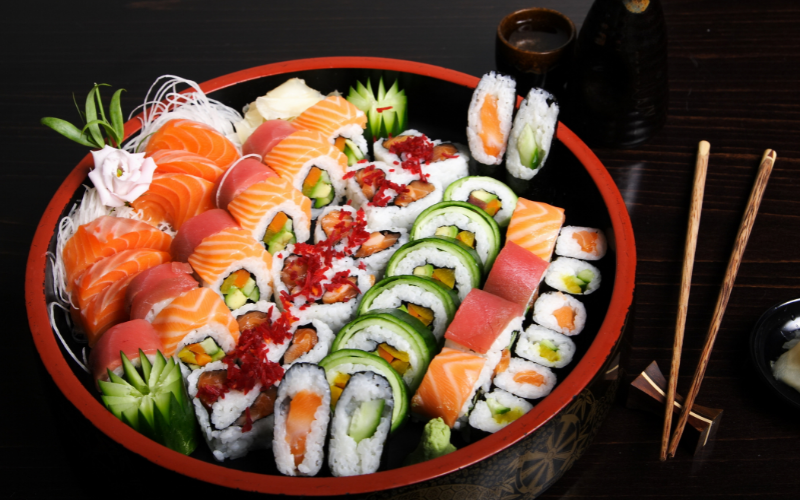 In 1958 Genroku Zushi, the first conveyor belt restaurant (called Kaiten sushi in Japanese) opened in Osaka. The owner of this sushi restaurant came up with the idea after visiting a beer bottling factory and noticed how the conveyor belt could potentially be a solution to attend more customers at once. The restaurant became popular, and the system started to be implemented anywhere across Japan. It revived the popularity of sushi restaurants among the general public.

Over time some of them began to offer sushi for 100 yen, reviving the popularity of sushi restaurants among the general public since traditional-style good sushi restaurants tend to be expensive. Then, with the appearance of this kind of restaurants, different types of sushi other than raw fish also began to appear – for example, hamburger sushi or other types of meat.

Regarding the international popularization, in the early 20th century, during one of the National Cherry Blossom Festivals held in Washington, D.C., a group of Japanese brought professional sushi masters along with sushi-related books translated into English. Their purpose was to show the world this unique Japanese cuisine.

However, when the first Japanese in the United States started opening sushi restaurants, they realized that Americans didn’t like the idea of eating nori (seaweed). So they came up with a great idea: they rolled it inside-out, putting the seaweed on the inside. As they didn’t see the seaweed, people started to eat them. They also adapted them a bit more to the local taste. That’s how the famous “California roll”  was born, and it’s well known around the world.

At first, the idea of eating raw fish didn’t particularly excite foreigners. Everyone knew about the famous Japanese sushi, but to be honest many saw it as “that weird Japanese food”. But gradually raw fish started to be introduced as something normal in the West as well, thanks to the new generations with a more international mind who can travel abroad and try different flavors. Lately we see not only sushi but also products such as the famous “poke bowls”, which include elements very similar to sushi such as raw fish, rice and nori seaweed, although in a different composition. In another hand, the take-away sushi business was already starting to take off a few years ago, but especially with the situation of the last two years and services as Uber Eats, sushi delivery services have skyrocketed.

Thanks for reading this far! What do you think about the evolution of sushi over the years? I always find it interesting to see how some of our current food or customs come from the customs of our ancestors, such as the fact of preserving food, etc. 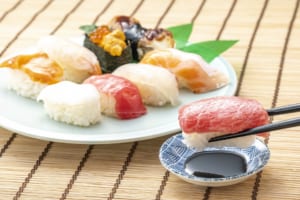 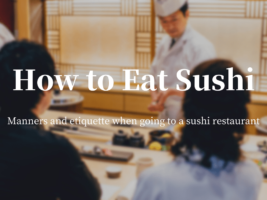 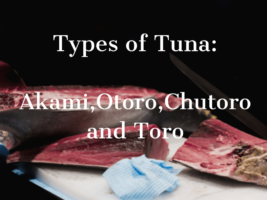 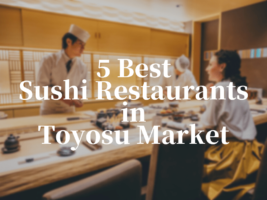 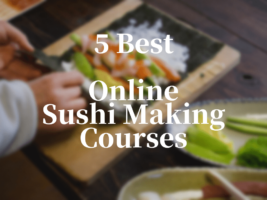 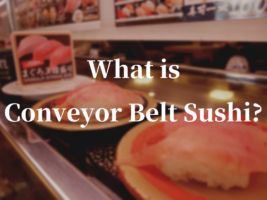 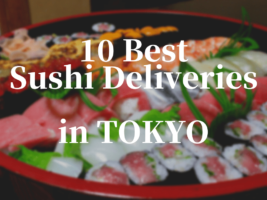